Volkswagen is putting an end to the Kombi’s illustrious 56-year long production run after unsuccessfully attempting to extend its life by a year or two. The van is being phased out because a batch of laws that will come into effect on January 1st, 2014, across Brazil make it mandatory for all new vehicles to come standard with airbags and ABS brakes.

Volkswagen has taken on the daunting task of installing an airbag in the Kombi but it has not found an efficient way to fit it with ABS brakes.  The T2 is an icon even in Brazil and several members of the national government tried to save it after Volkswagen announced the end was near last August. Guido Mantega, Brazil’s finance minister, brought up the idea of exempting the Kombi from complying with the new laws because it was designed well before airbags and ABS brakes even existed.

Brazil’s Conselho Nacional de Trânsito (CONTRAN) evaluated Mantega’s request but ultimately decided not to give the Kombi a second lease on life.

“Making an exception [for the Kombi] would be a big setback for us. We are concerned with raising the safety standards of the Brazilian auto industry. Our focus is on the lives and safety of our people,” explained city minister Aguinaldo Ribeiro in a statement.

The last Kombis built will be part of a special edition called Last Edition. Limited to just 1,200 examples, the Last Edition vans are characterized by a retro-inspired two-tone paint job, bespoke stickers all around and blue and white vinyl upholstery on the inside. The Last Edition costs 85,000 Brazilian Reais, a hefty sum that equates to nearly twice the price of a regular Kombi.

The very last Kombi is scheduled to roll out of the Anchieta, Brazil, factory today, marking the end of the line for the oldest new commercial vehicle in the world. 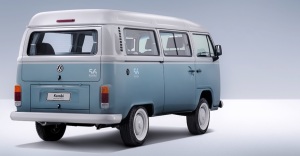