Porsche raised eyebrows in 1989 when it unveiled a concept car called Panamericana at the Frankfurt Motor Show. Borrowed from an iconic race held in Mexico, the name suggested the concept was a no-compromise sports car – a lightweight version of the 911 ready to hit the track – but that was far from the case.  The Panamericana was a bold-looking convertible that mixed 911 Targa and dune buggy styling cues into a oddly-proportioned-yet-futuristic package.

The Panamericana was designed by Steve Murkett under the supervision of design chief Harm Lagaay, a man whose name is also associated with the Porsche 924, the Ford Sierra and the BMW Z1.  The car was based on the then-new 964-series Carrera 4 floor pan but it featured a bespoke body made out of carbon fiber and fiberglass in order to reduce weight.

Finished in an attractive shade of dark green, the Panamericana boasted a sleek silhouette that made it more aerodynamic than the aforementioned Carrera 4.  The headlights were tilted at a sharp angle and the tail lamps were loosely inspired by those found on the 928, while the two air vents on the decklid paid a discreet homage to the 356.

The roof was removable in three pieces and the rear window could be lifted off entirely.  When installed, the roof panel was designed to be protected by a leather cover that attached to the car via large zippers inexplicably painted in purple.

Outside, the finishing touch was a set of 17-inch alloy wheels designed by Porsche and manufactured by Speedline.  They were wrapped in Goodyear tires that featured hand-cut Porsche crests in the thread.  The lack of any real fender flares made it possible to mount several different wheel sizes on the Panamericana, making it possible to transform the car from a track performer into an off-roader with only a jack, a wrench and a set of lugnuts.

The interior was standard Carrera 4 fare save for a bespoke pair of bucket seats with four-point seatbelts and several touches of purple trim.  The Germanic dashboard with its comprehensive array of gauges was lifted straight from the 4.

While the car was penned under the direction of Lagaay, nearly every other aspect of it was masterminded by Ulrich Bez, an engineer who made a name for himself by becoming CEO of Aston Martin several years ago.  Bez opted to use an unmodified Carrera 4-sourced air-cooled flat-six that sent 250 horsepower and 229 lb-ft. of torque to all four wheels via a five-speed manual transmission.  The car was capable of reaching 62 mph (100 km/h) from a stop in an estimated 5.8 seconds.

Following its debut in Frankfurt, the Porsche Panamericana concept was quickly shipped to Japan and exhibited at the Tokyo Motor Show.  Lagaay hoped the convertible would be given the green light for a small production run but Porsche’s deep financial woes quickly put an end to all hopes of seeing the Panamericana in showrooms.  However, its design heavily influenced the 993-series 911 and, to a lesser extent, the Boxster.

Most sources claim two examples of the Panamericana were built: One to display at the Frankfurt and Tokyo shows, and another to give to Ferry Porsche as his 80th birthday present.

Interestingly, every Porsche employee at the time was given a 1/43-scale model of the car mounted on a bronze  plaque.  Many have survived, and they fetch a small fortune on popular auction sites around the world. 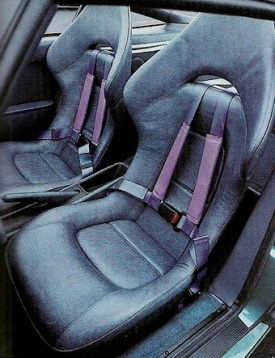