Mercedes-Benz started dabbling in electric technology in the beginning of the 20th century when it equipped the Berlin fire brigade with a fleet of battery-powered trucks.  At the time, the internal combustion engine was fighting head-to-head against the electric drivetrain for dominance of the burgeoning automobile industry but the fight soon shifted in favor of gas-burners and electric motors were largely forgotten about for several decades.

Automakers all around the world started to re-think the electric motor in the late-1960s.  While BMW was busily developing an all-electric version of the popular 1602 in time for the 1972 Munich Olympic, Mercedes was putting the final touches on an experimental electric van called LE306.  It stood out from other EV projects because its battery pack could be quickly swapped out when empty, a concept recently championed by California-based Tesla.  Nothing came of the LE306 project even as the oil crisis hit and Mercedes took a different approach to alternative drive by introducing a plug-in hybrid version of the w123 station wagon in 1982

The company returned to pure EVs in 1990 when it presented an experimental electric 190 (w201) at a trade show held in Hanover, Germany, and again at the 1991 Geneva Motor Show.  The car was powered by two 22-horsepower permanent magnet excited motors that each spun one of the rear wheels. Electricity was stored in a sodium-nickel-chloride battery pack.

Eager to prove its electric technology, Mercedes participated in a massive state-sponsored pilot program held from 1992 to 1996 on a small island in the Baltic Sea called Rügen.  The program was designed to find out whether or not EVs could be used as a viable form of transportation by regular drivers.  Sixty vehicles participated in the program including a BMW 325 Electric (E36) and several Mercedes 190s equipped with different motor / battery pack combinations in order to test which setup worked best.  Interestingly, all of the 190s were equipped with two battery packs, one in the engine bay and one in the trunk.

Seven of the 190s boasted a driving range of roughly 68 miles (110 kilometers) thanks to the aforementioned sodium-nickel-chloride battery packs, but the downside was that they each weighed nearly 3,100 pounds (1,400 kilos), approximately 330 pounds (150 kilos) more than a regular-production 190D.  The cars were equipped with a direct drive, eliminating the need for a transmission.

Three additional cars were equipped with nickel-cadium battery packs that offered a very limited range of 24 miles (40 kilometers).  These did not feature a direct drive and were fitted with a regular manual transmission. 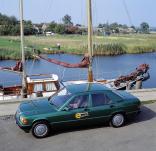 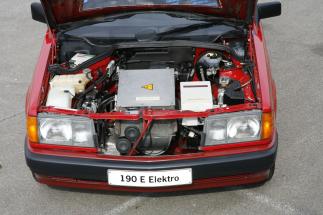 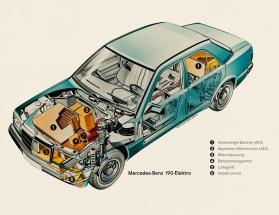 The data gathered from the various w201-based projects was used to design and build a more user-friendly EV based on the w202, Mercedes’ first-ever C-Class.  Discreetly presented at the 1993 Frankfurt Motor Show, the car was powered by a 48-horsepower asynchronous electric motor and a battery pack dubbed Zero-Emission Battery Research Activities (ZEBRA).  The setup was considerably more compact than any of the drivetrains that had powered the experimental 190s and it enabled the battery-powered C to offer as much passenger and trunk space as its gas- and diesel-burning counterparts.  The car had a maximum driving range of 68 miles (110 kilometers).

The C participated in several small pilot programs over the following years but it was never considered for mass production.  However, engineers applied the knowledge gained from the project to a battery-powered variant of the W168 A-Class that was built in 1998 and tested for several years.