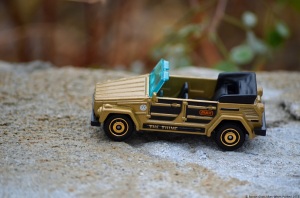 Matchbox has produced several 1/59-scale models of the Volkswagen 181 / Thing since 2008. Initially modeled after a yellow 1975 example, the first model marked the beginning of the expansion of Matchbox’s vintage Volkswagen lineup.

The Matchbox-built Thing proved popular among buyers and it was re-released numerous times in different colors including white, light blue, orange (popular on the real thing – no pun intended), and a host of safari and camouflage motif. Released this year as part of Matchbox’s 60th birthday collection, the latest Thing is finished in a slightly odd combination of gold and black.

Regardless of color, all versions of Matchbox’s Thing are surprisingly realistic, a sign of the effort the company put into differentiating itself from sister company Hot Wheels. It’s not a particularly well-detailed (the windshield has no frame, for example) model but it’s not supposed to be because it’s marketed as a toy, not a collector piece. Still, the ripples on the hood and on the doors, the rear air ducts, the decklid hinges and even the flat-four’s oil pan have all been faithfully reproduced.

The majority of Matchbox’s Things were sold in standalone boxes so finding an unopened example that hasn’t been played with is a relatively simple task and it shouldn’t cost more than a few bucks.