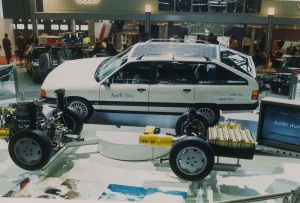 Volkswagen CEO Dr. Martin Winterkorn recently announced the group is aiming to become the world’s largest producer of electric and hybrid vehicles by the year 2018. Whether Volkswagen will reach its ambitious goal is hard to predict, but there is no doubt that hybrid and electric vehicles will grow in popularity over the coming years as governments around the world tighten the screws on CO2 emissions.

In many ways, Audi foreshadowed the effect that governments would have on the way citizens get around when it developed a plug-in hybrid drivetrain in the late 1980s. At the time, city governments in West Germany were beginning to ban motorized traffic from certain streets to respond to complaints from local residents about exhaust fumes and noise. However, it soon became evident that banning cars entirely was not a viable solution because the need for transportation still existed, and Audi believed gas-powered vehicles that could operate on electricity alone at low speeds were the answer.

Introduced in December of 1989 and presented for the first time at the 1990 Geneva Motor Show, the experimental Audi duo was a plug-in hybrid station wagon similar in concept to the Mercedes-Benz w123 plug-in hybrid developed about a decade earlier. Like many hybrids before it, the duo mixed an internal combustion engine with an electric motor but it stood out from the pack because each of its power source drove its own axle, a setup that is becoming more and more common in today’s advanced hybrids.

Starting with a stock Audi 100 Avant, engineers removed the driveshaft and installed a 132-pound (60-kilo) cylindrical electric motor connected directly to a stock quattro rear axle. The motor was engaged by putting the gearbox in neutral and pressing the “E” button located on the dashboard.

The motor made 12.6 horsepower – about a tenth of the power generated by the gasoline-burning lump found under the hood – but a potent 81 lb-ft. of torque, powering the duo to a top speed of up to 31 mph (roughly 50 km/h) on level roads, a velocity sufficient for meandering through stop-and-go traffic in big cities. The wagon could reach 18 mph (30 km/h) from a stop in eight seconds.

With the gas-burning engine turned off, a small electric motor powered hydraulic accessories such as the power steering system and the brakes, while a gas-burning water heater kept the temperature steady inside the cabin.

The motor was linked to a nickel-cadmium battery pack located in the spare wheel well. The pack weighed 440 pounds (200 kilos), a hefty amount that required the use of upgraded springs and 205/60 R15 tires.

Beyond 30 mph, the duo was powered by a stock 2.3-liter five-cylinder engine that made 133 horsepower and 140 lb-ft. of torque. Both engines were capable of working simultaneously at up to 3 mph (5 km/h) when four-wheel drive was needed in tough driving conditions such as starting on a snowy slope.

With the electric motor powering the car, the duo had a range of 24 miles (40 kilometer), which represented the best compromise between obtaining a useful range and limiting the size and weight of the battery pack. 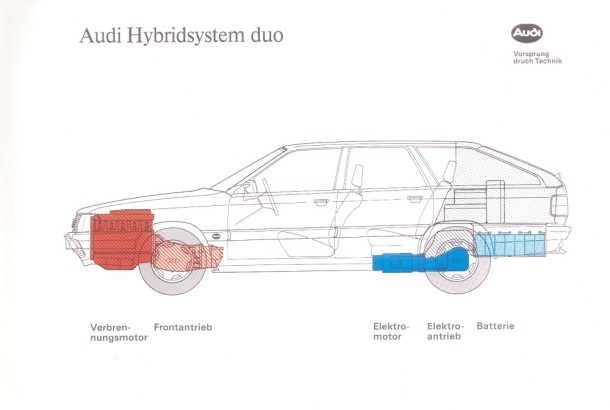 The driver had three ways to recharge the pack: The first was by simply plugging it in. A full charge took anywhere between 45 minutes with powerful, purpose-designed equipment or ten hours by using an on-board battery charger plugged into a regular household outlet.

Second, the car was equipped with a regenerative braking system that turned the motor into a generator that used kinetic energy to charge the battery pack when the brakes were applied.

The last way to charge the battery pack was by letting the duo sit in the sun. The car’s roof was equipped with 136 solar cells that generated enough electricity in ten hours to drive three miles (six kilometers). 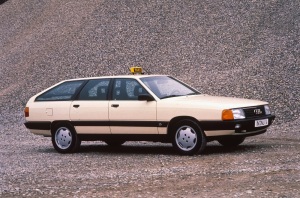 Because the 100’s body was not modified in any way, shape or form, the duo would have been relatively affordable to produce even in small quantities. Audi’s duo hybrid system had another distinct advantage: Because the two axles operated independently, the hybrid drivetrain could be installed in any quattro-equipped Audi regardless of whether it burned gas or diesel, or whether it was equipped with an automatic or a manual gearbox.

Audi said it would green-light the project if there was enough demand. There wasn’t, though a couple of examples participated in pilot programs to gather data about the battery pack and the motor.