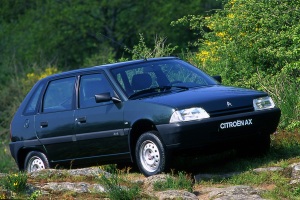 During the late 1970s, the off-roader market in Europe was largely limited to expensive vehicles like the Land Rover Range Rover, the Land Rover Series III and the Mercedes-Benz Geländewagen. Buyers who couldn’t afford those flocked towards the Lada Niva, a cheap and seriously capable 4×4 launched in 1976.

The Niva had almost no competition during its first few years on the market. Fiat fired first in 1983 with the Panda 4×4, and again in 1986 with the introduction of the Lancia Y10 4WD i.e. Volkswagen followed suit in 1990 with the undeniably offbeat Golf Country.

Citroën entered the fray in 1991 when it facelifted the AX family and introduced two new models: The GTi and the 4×4. Both were powered by the same 1,360cc four-cylinder gasoline-burning engine but the 4×4’s was detuned to 75 horsepower, 20 ponies less than the GTi.

The 4×4’s rear wheels spun freely under normal driving but the rear axle could be engaged by flicking a switch located towards the bottom of the center console. Because the system had no central differential, Citroën warned owners against driving over dry pavement for prolonged periods of time with four-wheel drive engaged.

Compared to a standard AX, the 4×4 sat about an inch (2.5 centimeters) higher off the ground. It was excellent on slippery terrains, snowy slopes and dirt roads but its limited ground clearance meant that it wasn’t as capable as larger purpose-designed off-roaders. This flaw is largely credited for the AX 4×4’s less-than-illustrious career. The car’s other big downside was that the body modifications required to fit a rear axle noticeably reduced trunk space.

Both three- and five-door variants of the 4×4 were offered, giving the car a slight advantage on the market because the Panda and the Y10 were only offered as a three-doors. Model-specific plastic cladding on both sides and a discreet “4×4” emblem on the right side of the hatch gave away the presence of a rear axle.

Production of the 4×4 carried on until July of 1996. By that point Citroën had launched a replacement for the AX, the Saxo, and sales slowly declined until the final example rolled off the assembly line in 1998. The Saxo was never offered with four-wheel drive