Up until last week, we were almost convinced the Fiat 127 was extinct in France. We’ve seen several 127s in Italy, we’ve stumbled upon a couple of SEAT-badged examples in Spain and we almost purchased a 127-based Fiat Fiorino last December, but we hadn’t seen a Fiat 127 in France in literally years.

Extinct is a bit of an exaggeration, but the 127 has become very rare. In fact, there are so few of them left in France that the government groups the 124, the 126, the 127 and the 128 under the same model and reports that 694 examples of all four nameplates are still on the road today.

We were fortunate enough to photograph a second-gen 127 parked next to a church in a small village last week. Seeing the car was not a big surprise because we had heard that it was running around the area from several people, but we had never encountered it before.

A sticker on the trunk lid indicates the 127 was sold new at a Fiat dealership in the city of Perpignan, not far from the Spanish borders and the Pyrenees mountains, but a quick look on Google Maps reveals the dealership has been replaced with what appears to be a roadside restaurant. Today, the 127 is wearing a ten-year old registration number issued in a neighboring department, so how it wound up on the outskirts of Marseille is a bit of an enigma.

The 127 has led a long and tiring life, and we’re willing to bet that it was wrecked several years ago. Not only is the front of the car a different shade of green than the back end, the passenger-side fender is wearing a SEAT emblem and the registration number appears to have been drawn in chalk on the bumper, indicating the car was operating without a license plate.

Paint aside, the car has been relatively well rebuilt, all things considered, and we’re glad because seeing a 127 in the metal is a very rare occasion. 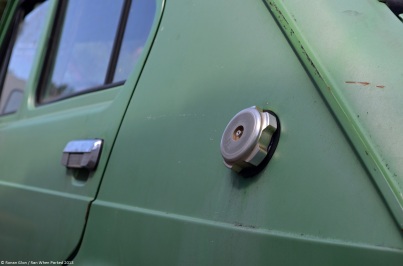