Believe it or not, Subaru sold more cars in the United States last month than Volkswagen. Both companies made their first steps in the in the U.S. by selling what in hindsight were small, odd, rear-engined economy cars at a low price. Volkswagen quickly chased volume by going mainstream but Subaru opted to remain a niche automaker for much longer and focused on rugged vehicles with flat-four engines and, more often than not, four-wheel drive.

Introduced in 1971, the first generation of the Leone was obscure at best and is rarely seen today. The second-generation model came in 1979 and started to win over more buyers but it was the third-gen model that truly cemented Subaru’s reputation as a manufacturer of tough and economical off-road vehicles.

Visually, the third Leone (also known as the GL and, later, the Loyale) was an evolution of the second-gen model but it was better-built and more ergonomic. Subaru offered it as a four-door sedan and a two-door coupe, but the five-door station wagon was pick of the litter for many buyers and the car essentially sold itself with little advertising and no heavily-publicized, PR-funded racing stunts.

The Leone offered four-wheel drive in an economical, four-cylinder-powered package, a rarity during an era where most four-wheel drive vehicles available in the U.S. utilized body-on-frame construction and a thirsty V8 engine. The only vehicle that came close to the Leone in terms of size and practicality was American Motors’ Eagle, though a vast majority of them were delivered with a six-cylinder engine.

Largely due to Subaru’s haphazard rust-proofing techniques, most Loyales for sale today are rusty, dented, high-mileage beaters listed for a few hundred bucks. Will Subaru’s first popular station wagon become sought after by collectors, or will it continue to depreciate? 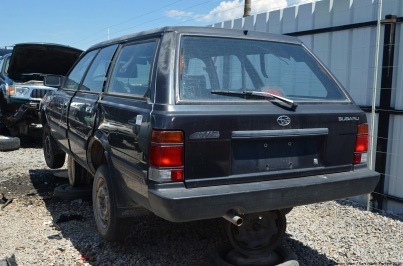 10 thoughts on “Is the Subaru GL/Loyale a future classic?”