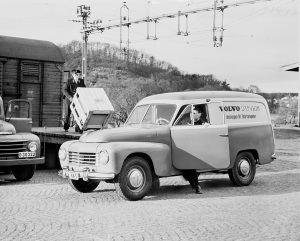 Volvo has a reputation of building durable and versatile station wagons, but it made its first steps in the family-hauler business almost by accident.

The story begins in 1947 with the launch of the PV444, a rounded compact two-door that propelled the Swedish firm into the modern era and helped transform it into a world-class automaker. At the time, the commercial vehicle segment was booming in Sweden but Volvo couldn’t get a piece of the pie because the PV444 featured unibody construction, a setup that made it ill-suited to different body styles.

To cater to buyers’ demand, Volvo designed a steel ladder frame capable of underpinning a commercial vehicle. Engineers replaced the 444’s comfort-oriented coil springs with a set of heavy-duty leaf springs, bolted a 444’s front end onto the frame and created the 445. Launched in the summer of 1949, the 445 was exclusively sold as a chassis-cab and fitted with a body by one of the roughly 30 independent coachbuilders operating in Sweden at the time. Popular configurations included pickups, hearses, ambulances as well as commercial and passenger vans.

The PV445 was powered by a 1.4-liter four-cylinder engine that sent 40 horsepower to the rear wheels via a three-speed manual transmission. Most variants had a payload of about 1,100 pounds (500 kilos) but the car’s tough construction meant that it could carry a lot more than that. 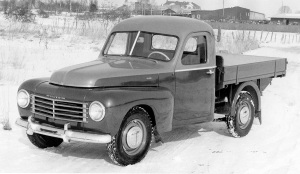 The 445’s life expectancy was much longer than anyone at Volvo had anticipated so sales began dropping at an alarming rate. In early 1952, Volvo had approximately 1,500 chassis-cabs parked outside of their factory with no one interested in buying them. Assar Gabrielsson, the firm’s president at the time, noticed that an increasing amount of 445s were being converted into wagons so he ordered the engineering department to quickly design a factory-built, 445-based wagon in order to liquidate the unsold cars.

In less than 15 months, engineers designed a body style that was well-suited to being used as a work van during the week and a family-hauling wagon on the weekends. Dubbed 445 Duett, which means two cars in one, Volvo’s very first factory-built station wagon was delivered on July 4th, 1953, to Gabrielsson himself.

The Duett was available as a panel van or as a station wagon and with a variety of work- and comfort-oriented options. It was an instant success in Sweden and production continued even after the 1,500 chassis-cabs were sold.

In 1960, the 445 Duett benefited from the same upgrades that were introduced on the PV544 two years earlier and renamed 210 Duett. The modifications included a single-piece windshield, a more modern-looking radiator grille and a four-speed manual transmission. In 1962, the wagon was upgraded with the more powerful B18 engine.

The Swedish government announced a host of new crash test regulations in 1969 and Volvo realized that the Duett would have a very hard time complying with them because its basic design dated back to the 1940s. As a result, every 210 Duett built in 1969 was exported except for the very last one, a dark blue example with chassis 97299 that was sent straight to the Volvo museum in Göteborg, Sweden, where it still resides today. 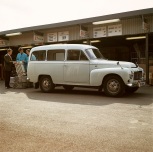 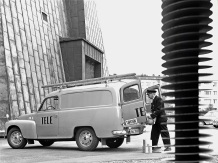 5 thoughts on “60 years ago: Volvo launches the Duett, its first station wagon”