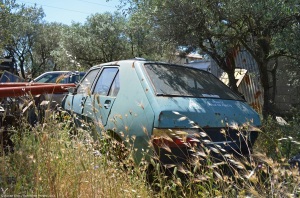 We didn’t have to go very far to photograph this Renault 14 TL: It’s one of the more far gone members of the Ran When Parked fleet. Off the road for about two decades, it was generously given to us last year to use as a parts car.

The 14 was purchased new in 1981 by the city government and passed from department to department over the course of the 1980s. By the early 1990s, it was in the hands of the forest fire prevention committee but an off-road trip that proved a little too challenging for the hatchback resulted in a broken steering rack.

At the time, the village was much smaller than it is today and the car was simply given to the previous owner for parts. Today, the village’s administration refuses to sell – let alone give – vehicles that have reached the end of their lives and they are generally sent to public auctions.

Over the following decade, the 14’s engine, transmission, interior bits and pieces and miscellaneous trim parts were all removed and fitted on a 1980 14 TL. It has sat idle for the last few years and become a storage unit but there are still some salvageable parts left on it, including the turn signals and light talks, the trailer hitch, the steering wheel and a few relatively rust-free body panels.

14 parts are getting increasingly difficult to find so this one is not going to the scrap yard until every single usable part has been removed.