Launched in 1986, the third generation 80 sedan hails from an era when Audi was still considered an odd-ball automaker trying to find its public. The 80 reflects Audi’s changing identity: Instead of being aimed at a specific segment, it was an in-between car whose entry-level variants competed against well-equipped versions of family sedans like the Ford Sierra and the Peugeot 405, and whose top-spec models quietly poached BMW 3-Series (E3) and Mercedes-Benz 190 (w201) buyers.

Audi billed the 80 as more futuristic and innovative than most of its rivals. From the very beginning it came with a fully galvanized body, a exceptionally low drag coefficient of 0.29, a wide array of carbureted, diesel and fuel-injected engines and procon-ten (Programmed Contraction-Tension) system, a complicated restraint system designed in-house by Audi. In the event of an accident, two thick cables linked to the drivetrain retracted the steering column away from the driver and removed all slack from the front seatbelts.

Generally speaking, the 80 was not luxurious enough to truly rival Mercedes and BMW but it had a brilliant career because it proved an excellent alternative to the aforementioned family sedans. It left its spot to the 80 B4 in 1991, a car that continued pushing Audi upmarket and paved the way for the successful A4.

Unlike the sporty coupe variant, the four-door 80 is not yet accepted into classic car circles and it is mostly sought after by folks who want a cheap and reliable car to get from point A to point B. What do you think, will the 80 B3 become popular among Audi enthusiasts? 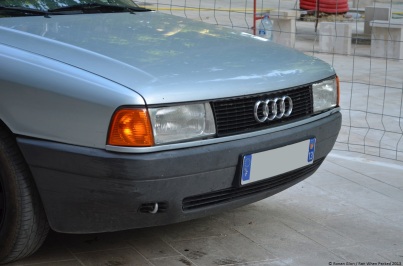