The Mercedes-Benz w123 series is one of the best-known cars ever to come out of Germany.  Recognized on virtually every continent for its exceptional longevity, most of the 2,696,914 w123s built are still on the road today and the car is a rolling demonstration of the phrase “they sure don’t build ’em like they used to.”

A big focus was put on safety during the w123’s development.  West Germany announced early on that front seatbelts were going to become mandatory starting on January 1st, 1976, so the car was designed to be fitted with them from the very beginning of the project.  The steering wheel was said to be roughly the same size as the average driver’s shoulders in order to absorb impact, and the steering column was collapsible to avoid impaling the driver in the event of a crash.  Mercedes went as far as fitting some prototypes with airbags but the concept did not immediately make it to production; a driver-side airbag was introduced to the Mercedes lineup on the w116 and added as an option on the w123 in 1982, however.

Production of the w123 began in the summer of 1975 when sixteen cars were built on what parent company Daimler calls a training line. The car made its debut in January of 1976, though the w114/w115 it was designed to replace stayed in production for almost a full year after that.  The w123’s rear end and center section both looked like an evolution of the w114/w115 but the front end marked a break from the past, borrowing styling cues such as the horizontal headlights from the w116 S-Class that debuted in 1972.

At its launch the w123 was only available as a sedan and was offered with a wide selection of four- and six-cylinder engines.  Most were carried over with minor modifications from the w115/w115 lineup but the carbureted straight-six M123 that was found in the engine bay of the 250 was all-new.

When Mercedes started taking orders for the w123, the wait was so long that slightly used examples often commanded a premium over new cars simply because they were available immediately.

Supply finally caught up with demand in 1977 and Mercedes launched three new variants of the car: a coupe, a long-wheelbase limousine and a station wagon.  This marked the first time that the company offered a station wagon that it had designed and built in-house – previous models were built by independent c0achbuilders such as Binz and IMA.

Mercedes gave the w123 its first and only facelift in 1982 when the square headlamps that had previously been fitted to range-topping models were fitted to the entire lineup. It should be noted that this facelift did not apply to w123s sold in North America.

The w123 sedan was phased out in November of 1985 but production of the station wagon carried on until January of 1986.  The w123 passed the torch to the all-new w124, the car that eventually became Mercedes’ first E-Class.  It was more technologically advanced than its predecessor but it was also noticeably more complicated.

The mid-range four-cylinder 230E variant of the w123 is a little bit more obscure than the well-known diesel-powered models.  Never officially imported to the United States, it was introduced in Europe in July of 1980 to replace the carbureted 230 which was phased out a month later.  An instant hit among buyers, it went on to become the most popular gasoline-powered w123 ever built with a total of 318,024 sold until production ended in 1985.  Of those, 245,588 were sedans, 42,284 were station wagons, 29,858 were coupes and 294 were sold as bare chassis to be converted into hearses and ambulances by companies such as Binz.

In early 1985, the 230E carried a base price of 130,720 francs in France and its list of options included a sunroof, MB Tex upholstery, an automatic transmission and the aforementioned airbag for the driver.  That same year, the cheapest w123 was the 200, which retailed for 115,980 francs, and the range-topper was the 280CE, which stickered for 184,590 francs.  To put those figures in perspective, in 1985 an entry-level three-door gasoline-burning Volkswagen Golf C cost 51,450 francs and a Porsche 911 Carrera Coupe cost 277,470.

Below are observations and driving notes we made while using a 1981 230E to run errands. 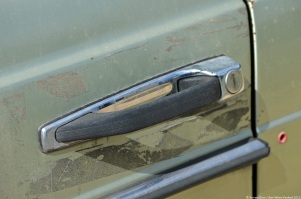 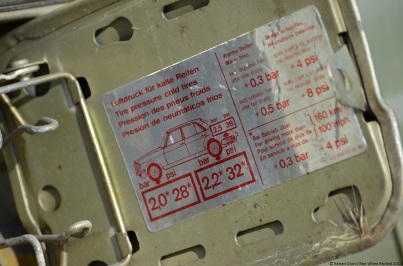 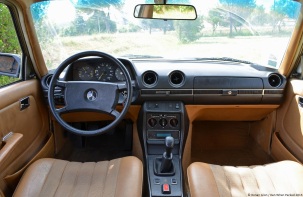 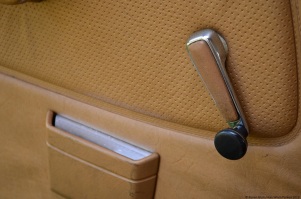 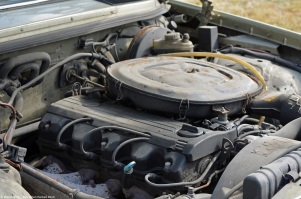 About our test car

This 230E’s exact origins are not known but it spent several years in Marseille, the automotive equivalent of hell.  While there it was vandalized and backed into on a regular basis and we picked it up mere hours before it was scheduled to get impounded.

Most of the trim is gone, three of the center caps are missing, the driver-side mirror and window were both smashed (we’ve since replaced the window), the hood star has probably been turned into a necklace, the hood opens with part of a coat-hanger and there are dents on nearly every single body panel.  To make matters worse, this car probably wouldn’t pass inspections because there is a hole in the exhaust but that’s besides the point – none of these issues are functional.  The engine runs strong, the transmission is crisp to shift and it’s a blast to drive.