Presented at the 1965 Frankfurt Motor Show, the NSU Autonova GT is proof that the automotive press can have a sizable influence on the shape of future cars.

By the late 1950s, Germany had started to recover from the ravages of World War II and a middle class with cash to spare and a taste for consumer good was starting to emerge once again. Fritz B. Busch, a well-known journalist that worked for Germany’s Der Spiegel newspaper, saw a niche market for a car that was less mundane and more fun-oriented than the Beetles, two-stroke DKWs and other miscellaneous budget-focused Fiats that roamed around German streets. Busch wanted to create a sports car for young drivers who couldn’t afford a w113 Mercedes-Benz SL-Class or a Jaguar E-Type.

The journalist joined forces with designers Michael Conrad and Pio Manzù and formed Team Autonova, which translated to “new car.” In the spring of 1965, the three men got to work on a vehicle which was inspired by Busch’s belief that the car should adapt to its driver and not vice-versa. NSU granted the team 60,000 Deutsche Marks and provided the chassis and engine from its popular Prinz 1000TT, enabling Autonova to significantly cut its research and development budget and quickly build a drivable prototype.

Visually, the coupe’s wedge shape and angular design cues made it stand out from other more rounded members of the NSU lineup, though a careful observer noted the Prinz-sourced four-lug steel. The front end was dominated by round headlights mounted on top of the fenders which earned the car the unflattering nickname of “frog.” Around back, the GT wore horizontal tail lamps and a large hatch that opened right above two rows of air vents that gave away the location of the engine. It is interesting to note that the GT was equipped with plastic bumpers integrated into the body, a novel concept at the time that was only introduced on a mass-produced car in 1972 with the first-generation Renault 5.

The interior was devoid of any useless features and it displayed an unmistakable Teutonic influence. The instrument cluster consisted of three clearly visible analog gauges, the rear-view mirror was mounted on top of the dash and the front wheels were commanded through three-spoke steering wheel. The car had a center console which house ad fourth gauge and a small glovebox.

The 54-horsepower 1.0-liter engine was mounted transversally behind the rear axle and accessed by opening the hatch and removing a small lid, roughly the same setup that was used on the Volkswagen Squareback. Although the mill remained unchanged, it enabled the aerodynamic GT to a top speed of 105 mph (170 km/h), making it 3 mph (5 km/h) slower than a Porsche 356! Power was sent to the rear wheels via a four-speed manual transmission that was also carried over from the Prinz.

Team Autonova presented the GT at the 1965 edition of the Frankfurt Motor Show, just four months after the first design sketches were made.  NSU was thrilled with the project and it allowed the designers to display the GT on its stand next to the regular members of its lineup.

The GT was a hit among the show-going public. The NSU stand was constantly full of visitors, including Heinrich Lübke, the president of West Germany, who was visibly fascinated by the car. Busch and his team set out to design a different kind of automobile and they had evidently succeeded.

Surprised by the positive reaction of the show-going public, NSU passed out ballots to each visitor and asked them whether or not they would consider buying a GT if it cost 8,000 Deutsche Marks, about twice the price of a Beetle. Surprisingly, most visitors replied with an enthusiastic “yes!” and NSU started mulling how to turn the show car into a production vehicle.

The chassis and engine were sourced from NSU’s parts bin so producing them was not problematic – if anything, building the GT would have saved NSU money through economies of scale. However, the body was very complex to assemble and NSU did not have enough spare cash to build even a limited run of GTs. Audi’s archives department is quick to point out that NSU had lost a lawsuit to Fiat over the name Neckar and had to pay a sizable amount in damages, which did not help its uncertain financial situation. Be that as it may, the Neckarsulm-based firm had just spent a small fortune developing the Wankel-engined Spider and it was in the early stages of designing the labor-intensive Ro80 so working on a third model, even one based on an existing chassis, was out of the question.

The GT was stored away and forgotten about but designers reportedly dusted it off and used it as a source of inspiration when they started working on the Porsche 924. The car is now part of the Audi museum in Ingoldstadt, Germany. 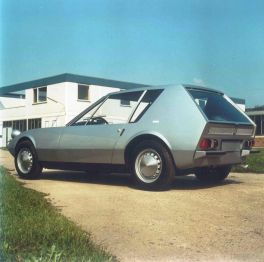