We stopped at a small used car lot not far from Marseille, France, to look at a Renault 14 that had grass growing up to its beltline, but a blue Renault 4CV caught our eye as we pulled in. Parked next to a long-wheelbase w210 Mercedes-Benz E-Class first registered in Monaco, the 4CV is partially dismantled but all of the missing parts seem to be scattered throughout the passenger compartment.

Remembered as the car that helped put France back on wheels during World War II, the 4CV was developed during the war and introduced at the 33rd Paris Motor Show that opened its doors to the public in 1946. It became the first French car to reach a million examples, and it stayed in production with only minor modifications until it was replaced by the Renault 4 in 1961.

The example we found at the car lot is fitted with the three-slat grille that replaced the original six-slat unit in 1954 and the new dashboard that was introduced in 1956. It also features the five-lug star-type steel wheels that were phased out in 1957, which gives us a rough indication of when the car rolled off the assembly line. The car’s current registration number was issued in 1980 and the last registration sticker dates from 1988.

Buying a vintage car from a generic dealership that specializes in late-model vehicles is rarely a good idea – the 14 GTL that initially caught our eye was priced at about twice its market value! This discouraged us from inquiring about the 4CV and a Mercedes-Benz 240TD that was sitting a few cars away. 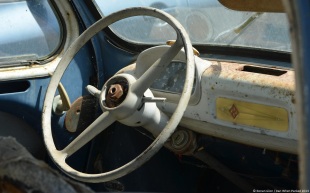