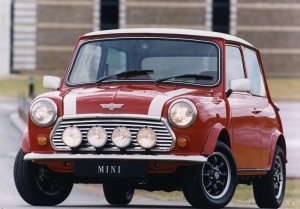 Rover fielded a Mini Cooper in the 1994 edition of the Monte Carlo Rally to commemorate the 30th anniversary of the car’s first victory in the event. Finished in red with a white roof, the 1994 race car was a crowd favorite because it looked nearly identical to its 1964 counterpart – the two cars even wore roughly the same registration number.

Rover followed up its stint in rallying with the limited-edition Mini Cooper Monte Carlo in June of 1994. Based on the regular Mini Cooper, it featured a red and white paint job that harked back to the Mini’s rally days and contrasting 12-inch alloy wheels painted in gray.  A sticker that mimicked a rally plate was affixed to the hood, and John Cooper’s signature was found on the front right fender.

All Mini Cooper Monte Carlo models came with tinted windows, four fog lights mounted in front of the grille and a copious amount of chrome trim.

Rover made no changes under the hood, and the Monte Carlo was powered by the same fuel-injected 1.3-liter four-cylinder that was found in the regular Cooper. Rated at 63 horsepower and 70 lb-ft. of torque, it sent power to the front set of wheels via a four-speed manual transmission.

Just 200 examples of the Monte Carlo were built worldwide, making it one of the rarer special edition Minis.

Note: We’ve emailed BMW’s archives department for more photos, we’ll update this article as soon as we get them.