The 5 has gone down in history as one of Renault’s biggest success stories. It helped redefine the compact economy car at its launch in 1972 and it stayed ahead of the competition until the early 1980s. The story was admittedly a little different in the North America, where it was re-badged LeCar for a brief and not particularly successful stint in the United States.

Replacing the 5 was a tough task for Renault. Instead going with an entirely new model, engineers elected to build upon the 5’s lines and bring them up to the standards of the 1980s. Launched in time for the 1984 model year, the car was baptized Super 5 but the plastic emblems on the hatch still read Renault 5. Its main rival was the Peugeot 205 that had all but wiped out the competition when it was introduced a year earlier.

Under the skin, the Super 5 was entirely new design fitted with a transverse engine, and it was the first Renault compact to offer a diesel engine.

The 5 was the best-selling car in its home country of France when the Clio debuted in 1990. Sales took a hit, but they did not reach rock bottom like many expected and Renault kept the car around as a stop-gap model between the Twingo and the Clio. The Super 5 was finally phased out in 1997 with a limited-edition model called Bye Bye (a name introduced on the Renault 4 earlier in the decade).

Today, pre-facelift models with a plastic Renault emblem in the middle of the grille are getting harder and hard to find, especially in the U.K. As the earliest models quickly reach 30-years old, will the Renault Super 5 become sought after by collectors, or will it simply disappear like the regular 5? 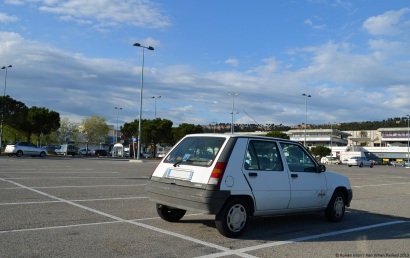 4 thoughts on “Is the Renault Super 5 a future classic?”