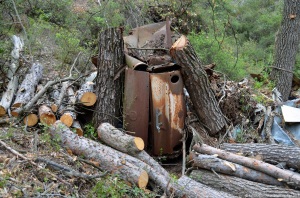 This Volkswagen 1500 Variant (known as the Squareback in the United States) is in the same ditch as the Renault 17 TS, the 4 TL and the 4 L that we have featured over the last week. It is the only non-French car in the ditch and the only one that appears to have caught fire.

Tightly wedged between trees, rocks and miscellaneous debris, the 1500 is noticeably more mangled than the other cars because it is in a steeper part of the ditch. The bodywork is almost entirely rusted, a tell-tale sign that a fire flaked the paint and exposed the bare metal. Whether it burned before being pushed down or as a result of the fall is hard to tell.

The Volkswagen has been stripped of all interior and mechanical bits, but, interestingly, all of the body panels are still present.  The license plates are gone, but we couldn’t check for a VIN number or an ID plate because the car is too banged up.

Stay tuned, some of the cars in the ditch that we haven’t featured here will be added to our barn finds page over the next few days. These include several Renault 5s and a pair of Renault 8s, among others. 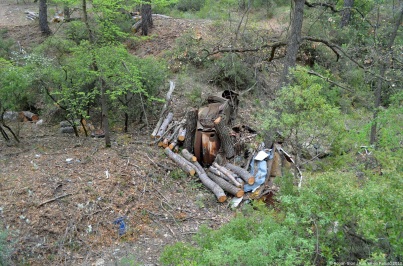