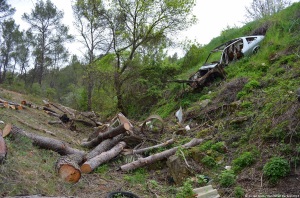 This Renault 17 is ending its days in the same ditch as yesterday’s Renault 4 TL. Although worn, the petal-shaped passenger seat and the Vert Algue (paint code 977) color indicate that this is post-facelift TS model built in 1979.

Renault 17s are few and far between and stumbling upon one in any shape is unusual. Finding one perched well above our head, however, was absolutely surreal. Pushed down from the top of the ditch, it is only held in place by a handful of small rocks and miscellaneous pieces of scrap metal.

Like the aforementioned 4, the 17 has been stripped clean of all of its mechanical bits, trim pieces, body panels and interior parts, but the passenger side seat and the top part of the rear bench are still in the car. All 17s built in 1979 came with a sunroof and the mechanism appears to be more or less complete.

The VIN number has been scratched off and the ID plates as well as both license plates have been removed, leaving little doubt that this car was stolen, dismantled and disposed of decades ago. 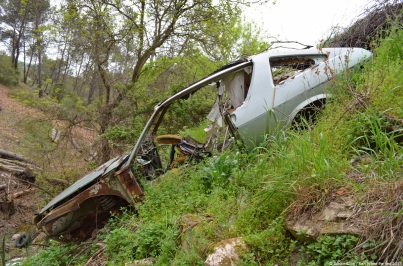 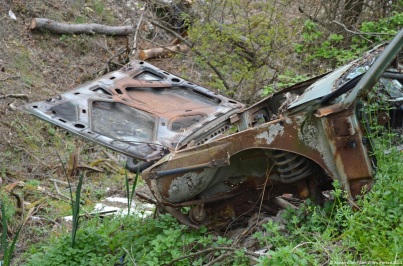