New cars are getting harder and harder to work on by shade tree mechanics so aftermarket equipment aimed at the average driver often consists of floor mats and car covers. However, a look at 60-year old magazines reveals that aftermarket companies offered a wide range of equipment that enabled owners to almost rebuild their car from the ground up inside and out. 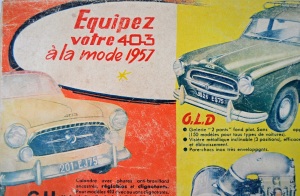 Most accessories were designed to make cars more luxurious, sportier and more reliable. A small portion of them aimed to overcome shortcomings of vehicles like the Citroën 2CV that were basic in order to be affordable, vehicles like the Renault 4CV that were brought to the market in a race against the clock or cars such as the numerous off-shoots of the Citroën Traction Avant that were simply too old because they were designed before WWII.

Here’s a look at some of the more interesting accessories that we found while browsing French car magazines from the 1950s. We’ve purpose skipped the more well-known accessories such as radios. 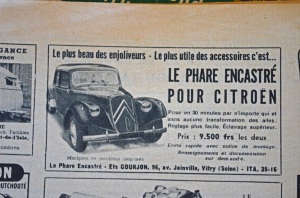 This is an interesting modification that we have never seen in person before. Gourjon claimed that for 9,500 francs, its flush headlights were easier to adjust than the stock units and offer better lighting. They could be mounted in just 30 minutes without making any modifications to the fenders.

Roll down windows for the Renault 4CV 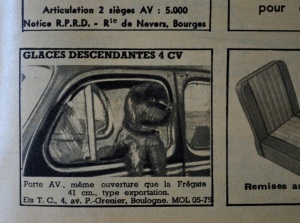 Early Renault 4CVs were equipped with sliding front windows similar to the ones that were later found on the 4. The sliding mechanism was cheap to make but the windows were tiny and provided very little air flow. T.C. was among the many companies that built built roll-down kits for the 4CV.

These modifications were popular and Renault fitted some models with standard roll-down windows later in the production run.

Beefier bumpers for the Citroën 2CV 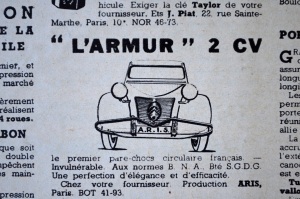 The Citroën 2CV’s skinny bumpers were mostly there for show and cars that lived in busy cities often ended up dented by other motorists. Paris-based ARIS offered a tubular front bumper that met period French safety standards and helped protect the 2CV’s hood and fenders.

ARIS’ modification did not catch on but many similar bumpers were available during the 2CV’s long production run. 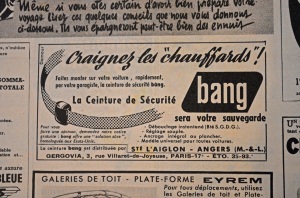 Aftermarket components manufacturers touted seatbelts as life-saving devices decades before national governments around the world made them mandatory. Bang claimed that their seatbelts could adapt to nearly all new cars by simply drilling holes in the floors and were safe because they were certified for use in the United States. 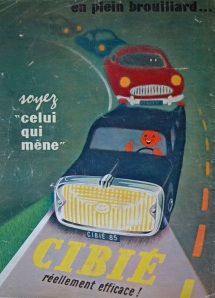 In most applications, fog lights offered considerably better lighting than the yellow French-spec headlights that were found on all new cars in the 1950s. A myriad of companies built them but Marchal and Cibié were by far the most popular choices. Cibié offered three different shapes of lights that blended in the lines of most new cars out there. 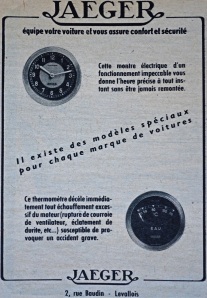 In Europe, many economy cars did not come standard with basic instrumentation such as a fuel gauge and a tachometer until well into the 1960s, so owners who wanted to obtain vital information about their car often turned to aftermarket gauges such as the ones built by Jaeger. It was rare that these gauges could be cleanly installed in the instrument cluster and they were often mounted above or below the dashboard. 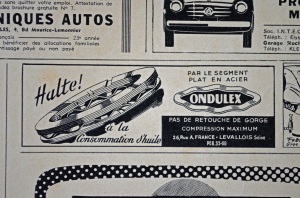 Ondulex boasted that its steel piston rings could curb excessive oil consumption and restore compression without needing to hone the cylinders. Still around today, the firm was one of numerous manufacturers who bragged that it could bring almost miraculous results to worn and tired engines. 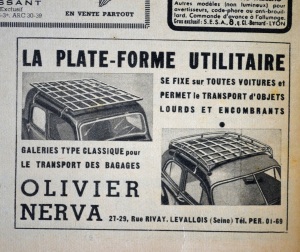 Ergonomics took a backseat in a car’s design process so it was not uncommon to see a large car with a small – or hard to access – trunk. Rear-engined cars such as the Renault 4CV and Dauphine and the Fiat 600 suffered from a similar problem. Folks who wished to increase their car’s cargo capacity opted for a roof rack like the ones made by Olivier Nerva. Designed to be bolted to the top end of nearly all cars, they boasted a high-strength tubular frame and were a very widespread accessory. 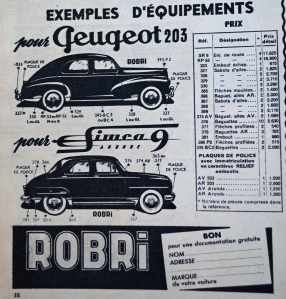 Exterior add-ons were a popular modification that enabled owners to customize their car and stand out from the crowd. Ranging from the discreet to the overtly tacky, the trim bits included of chrome strips, hubcaps, side moldings, different bumpers, exhaust pipes and even license plates with specific fonts. The Simca 9 and the Peugeot 203 are pictured above but add-ons were available for just about any new car.

Interestingly, 60 years later car manufacturers are looking towards the past they offer buyers a growing catalog of miscellaneous stickers, trim pieces wheel designs and so forth. 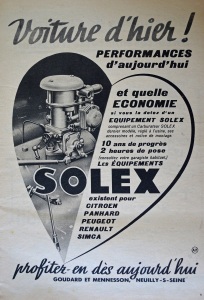 Solex encouraged owners of older cars to upgrade their carburetor in order to get ten years’ worth of progress in just two hours. Available for Peugeot, Renault, Citroën, Simca and Panhard models, the Solex carbs were billed as plug-and-play because they came pre-adjusted from the factory.

Intake manifold and twin-carb modifications for the Citroën 2CV 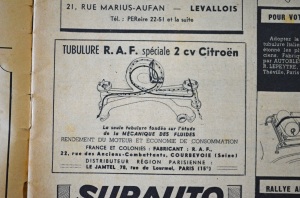 Citroën launched a 425cc variant of its flat-twin in 1954 to cater to a drivers that were after a more powerful 2CV. While it was undeniably peppier than the existing 375cc unit, the 425 made less than 20 horsepower and many aftermarket companies tried to find ways to obtain more power. The twin-carb manifold built by R.A.F. is one of the more extreme modifications because it consists of an odd loop-shaped intake. A single-carb setup that used the 2CV’s stock Solex was also available.

Manifold and exhaust modifications for Simcas, Renaults, and Peugeots 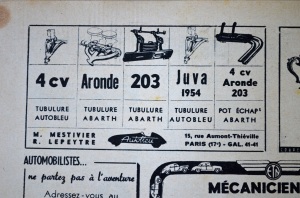 AutoBleu specialized in designing performance-focused intake and exhaust manifolds that squeezed every last horsepower out of the four-cylinder engines found in every day cars. The firm also sold a variety of Abarth products under license, helping the Italian extend its reach all around Europe. AutoBleu briefly dabbled in car manufacturing before calling it quits and Carlo Abarth’s story is well-known, but it’s interesting to see the wide scope of models that the firm worked with.

We don’t know what would be more surprising today: Finding a Peugeot 203 with an Abarth exhaust, or seeing Abarth offer an exhaust for the Peugeot 508.

3 thoughts on “A look at vintage aftermarket accessories”