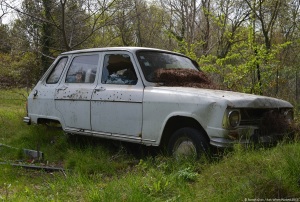 An acquaintance led us to this Renault 6 hidden deep in a small forest located between a medium-size town in France’s Bouches-du-Rhône department and the Mediterranean sea. Covered by a thick layer of dust and moss, the 6 was likely taken off the road following a mechanical failure.

The 6 is equipped with the old-style grille that was phased out for the 1974 model year but it is also wearing the then-new Renault emblem, indicating that it was most likely built in 1973. The license plates, blocked out here as a courtesy to the owner (assuming it has one), confirm that date.

Years of sitting out in the open have not been kind to the 6 and it is starting to get fairly rusty around the edges. It would make a great parts car, however, because with the exception of a missing rear wheel and two broken windows – the product of vandalism, no doubt – it is fairly complete.

Interestingly, it has not been sitting under the pine tree as long as it might seem and registration stickers on the windshield indicate that was still insured and inspected twelve years ago.

One thought on “Rust in peace: Renault 6”