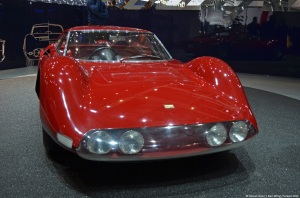 Pininfarina is displaying a one-of-a-kind sports car called Dino Berlinetta Speciale next to a new Ferrari-based concept car called Sergio.  Presented at the 1965 Paris Motor Show, the Dino was designed jointly by Battista Pininfarina, the company’s founder, and his son Sergio, who passed away recently at 85-years old.

The low hood and tall, rounded fenders of the Berlinetta Speciale seem to preview the 206 GT that was launched in 1968 and also designed by Pininfarina.  The side is dominated by a piece of trim that integrates the exterior door handle and ends in a functional air scoop, and the rear end is truncated, an aerodynamic design cue that was also found on the 206 GT.

Inside, the Berlinetta is an excellent example of the simple race-inspired dashboard that came out of the 1960s.  The dashboard is fully padded and dominated by four round gauges and the steering is commanded through an elegant three-spoke steering wheel.  The two bucket seats are upholstered in leather.

The car was never given the green light for production but it reportedly inspired Ferrari to launch the Dino line a couple of years later.

Sergio Pininfarina personally donated the Berlinetta to the museum of France’s Automobile Club de l’Ouest in 1967. The museum vowed to never sell it which at least partially explains why it still resides there today.