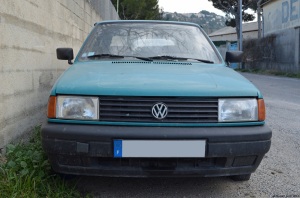 The second generation of the Volkswagen Polo  (called type 86C internally) was presented to the public in October of 1981 as a boxy three-door wagon with an almost shooting brake-like silhouette.  This was a daring move on Volkswagen’s part because the first Polo had built up a loyal fan base by offering the practicality and look of a hatchback in a pint-sized package.

The Polo lineup grew at the 1982 Paris Motor Show with the addition of a two-door model called Derby and a sleek three-door dubbed  Polo Coupé that featured a less upright rear hatch.  While it retailed for more than the wagon, the coupe’s silhouette was very close to that of the original Polo.

Throughout the 1980s, the Polo wagon and the Polo Coupé were both marketed as a cheap and robust form of transportation and often fought over roughly the same target audience.  In an effort to make the Coupé the sportier version of the two, Volkswagen launched several performance-focused variants such as the GT and the supercharged G40.

The coupe body soldiered on when the second-gen Polo was given a thorough facelift in 1990, but it was not retained when the third installment of the nameplate was finally launched in 1994.

Will the Polo Coupé’s sleek body earn it respect among Volkswagen enthusiasts as it gets older, or will it go down in history as merely an unloved econobox?

6 thoughts on “Is the Volkswagen Polo Coupé a future classic?”