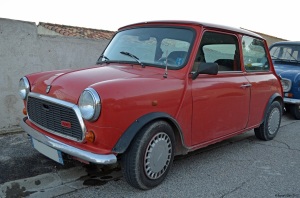 The cars we feature in our “Driven daily” series are often randomly spotted while running errands or on miscellaneous travels. This 1988 Austin Mini Red Hot is a little different because it is owned by a member of our extended family who purchased it several months ago.

The Mini Red Hot and the matching Jet Black model were limited editions launched in January of 1988. They were both based on the entry-level Mini and powered by a 42-horsepower 998cc four-cylinder engine.

Only 3,000 examples of each model were built for Europe and Japan and, if memory serves, the model pictured here is the only one we have ever come across. It was sold new in Mérignac, France, at a dealership called Stewart & Arden that also sold cars Jaguars, Land Rovers and Rolls Royces. A little sleuthing reveals that the dealership is still around today but it only represents Land Rover.

We’ve digressed: The Red Hot left the Atlantic in favor of the warm Mediterranean climate in the middle of the 1990s and it lived on the outskirts of Marseille up until earlier this year. It has been through the hands of at least four owners but it has never been modified in any way, shape or form and it is original down to the unworn velour fabric on the seats.

Unfortunately, rust has not spared this Mini and the bottom of the passenger side door shows several holes which we blame on a dry-rotted window seal that lets water drip through. A replacement door was included in the sale and the owner is saving money to get the car repainted in its original shade of red before swapping it out.