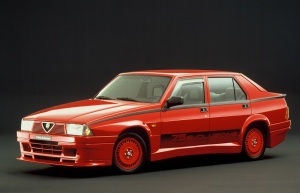 In spite of deep financial issues, Alfa Romeo was one of the first manufacturers to sign up for the Italian Superturismo Championship when it started in 1987.

As can be expected, participating in the championship wasn’t as simple as showing up on race day with a full tank of gas and a driver.  Numerous rules and regulations applied to the cars that were entered in the competition, including a clause mandating that at least 500 examples of each model raced had to be sold to the general public.

To be authorized to race the 75 Turbo, Alfa Romeo got to work on creating a track-inspired version dubbed 75 Turbo Evoluzione to sell across Europe.

Most of what set the Evoluzione apart from a standard 75 Turbo was tacked on to the body. The car featured a track-inspired body kit that consisted of side skirts, wider fenders and more aggressive front and rear bumpers.

The Evoluzione wore the same same discreet trunk-mounted spoiler that was found on the 75 3.0 V6, better known as the Milano Verde among U.S.  Less discreet were the “75 TURBO EVOLUZIONE” stickers that ran across both sides of the cars.

Alfa Romeo fitted the 75 Turbo Evoluzione with 15-inch BWA rims that were nearly identical in design to the Campagnolo-built ones that were mounted on some GTV6s in the middle of the 1980s.  The wheels were finished in the same shade of pastel red as the rest of the body.

The aesthetic modifications were limited to the car’s exterior and the interior stayed the same as the 75 Turbo.

Because the 75 Turbo Evoluzione was forced to live in the shadow of the range-topping 75 3.0 V6/Milano Verde, its engine was heavily detuned compared to the one that was found under the hood of the race car that inspired it.  It was a four-cylinder mill with a displacement of 1,762cc, less than the regular-production Turbo’s displacement of 1,779cc.  The decrease was necessary to comply with the Superturismo Championship’s regulations and was achieved by reducing the engine’s bore.

Fed with a Garrett T3 turbocharger, the four-cylinder churned out 155 horsepower and 166 foot-pounds of torque, enough to propel the 75 from zero to 62 miles per hour in 7.7 seconds and on to a top speed of 130 miles per hour.  These figures are about on par with those of a 75 3.0 V6.  Like in the regular 75 Turbo, power was sent to the rear wheels via a five-speed manual transaxle.

Alfa Romeo only built the 500 examples that it needed to homologate the 75 Turbo Evoluzione and called it a day.  The car didn’t win the 1987 season of the Italian Superturismo Championship but it went on to have a successful career in other racing series across Europe.