When Pierre Dreyfus became the CEO of Renault in 1955, one of his goals was to forge an industrial union with Peugeot that would create a powerful French automaker capable of rivaling giants like Fiat in both size and market share.

Dreyfus came close to his dream in April of 1966 when Peugeot and Renault inked a memorandum of understanding that called for the joint purchase of materials and a close collaboration in research and development.

The agreement between the two French automakers was never up to either party’s expectations and it ended with a phone call from Peugeot’s François Gautier on June 24th, 1974.  Gautier informed Dreyfus that his company had just signed a deal to take over Citroën from Michelin and therefore had to end its collaboration with Renault.

The news was a big blow to both Renault and Dreyfus, who would leave office after twenty years of service the following year. Before retiring he was determined to make use of the four-cylinder Douvrin gasoline engine that had been developed by the Société Française de Mécanique Renault-Peugeot, a joint-venture created by Peugeot and Renault.

Renault’s designers were already working on what they called project 121 internally, which would later become the 14. The company’s top brass quickly decided that the Douvrin engine would find its way under the hood of the upcoming 14, making it the first Renault equipped with a transverse engine.

The 14’s lines were inspired by the Basic Research Vehicle that Renault introduced in London in 1974.  It was a modern and sleek car on paper but story has it that the heavily curved C-pillar couldn’t easily be mass-produced, forcing designers to change the shape of it at the last minute.

As if that wasn’t a big enough setback, Renault had to delay the car’s launch by about six months because of financial issues and labor unrest at many of its factories across France.

The 14 was finally presented to the general public in late May of 1976 when no less than 500 of them embarked on the 120-mile long journey from the Douai factory to the hôtel national des Invalides in Paris. The public and the press were shocked by the car’s lines, a reaction that could have been predicted as even Renault’s own test drivers were not sold on it at the time.

Fueled largely by the French and the Spanish market, the 14 got off to a respectable start but sales were far from what the Regie had expected. The 14 wasn’t a bad car by any means, the press constantly praised its handling and its comfort, but car shoppers had a hard time looking past the shape of its body.

Oddly enough the 14’s coup de grace came from Renault itself. Judging the “7CV du bonheur” (“the 7CV of happiness”) advertising campaign as not efficient, the French automaker commissioned an independent ad agency to launch a new campaign in 1977 that inexplicably pointed out that the car was shaped like a pear. By the time the ad campaign went live some unfortunate owners had already noticed the 14’s bad tendency to rust and the media nicknamed the car the rotten pear, ruining its reputation once and for all. 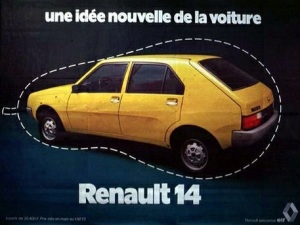 Another factor that contributed to the 14’s less-than-illustrious career was that it lacked many of the basic features that its competitors offered. For example, it was not available as a three-door hatch and it was never fitted with a diesel engine. New versions like the better-equipped GTL and the faster TS did little to turn the car’s career around.

To give the 14 a boost Renault redesigned it slightly in 1980. The biggest aesthetic change was that the front turn signals were now orange and mounted on the outside of the headlights instead of on the bumper. That was not enough and sales declined until production ended in 1983.

In the middle of the 1970s, the 14 occupied roughly the same spot in the Renault lineup that the Mégane hatchback holds today. It was much smaller than a current-model Mégane, measuring 158 inches long, 63 inches wide and 55 inches tall. It tipped the scale at 1,906 pounds.

When the 14 was introduced the L trim level served as the entry-level model but it was too bare bones and quickly given the axe, leaving the TL to fend for itself until the introduction of the GTL and the TS. The TL was powered by a gasoline-burning 1,218cc four-cylinder engine that made 58 horsepower at 5,500 rpms and 68 foot-pounds of torque at 3,000 rpms. As mentioned earlier, the engine was developed jointly by Renault and Peugeot and it was widely used in both automakers’ lineup at the time. The four-banger was tilted 72 degrees back towards the firewall which allowed the spare 13-inch steel wheel to live under the hood.

Power was sent to the front wheels via a four-speed manual transmission.  A five-speed manual unit was introduced to the lineup for 1981.

In 1980 the 14 TL carried a base price of 34,200 francs. The list of options included a full cloth sunroof, metallic paint, tinted windows, vinyl upholstery and a laminated windshield, but our test car is not equipped with any of them. Next up in the lineup was the 14 GTL at 36,300 francs and the range-topping 70 horsepower 14 TS model could be purchased in exchange for a nice and even 40,000 francs.

For the sake of comparison that same year an entry-level five-door Volkswagen Golf cost 32,990 francs. A Talbot Horizon retailed for 32,750 francs and a base model Fiat Ritmo (better known as the Strada in the United States) sold for 29,950 francs.

Despite tracing its roots back to the middle of the 1970s the Renault 14 feels like it hasn’t aged. It is roomy, it is practical and it is nearly effortless to drive. Even the entry-level TL model keeps up with modern traffic and reaches freeway speeds, though wind and engine noise are both very noticeable.

The independent suspension is soft and excellent over rough surfaces but it provides a large amount of body lean that can take passengers by surprise if they aren’t used to French cars of that era. Unfortunately the front seats are about as soft as the suspension and they could use more lumbar support.

The car’s instrumentation is limited to a speedometer, a gas gauge and a wide array of miscellaneous warning lights. The instrument cluster is easy to read and with the exception of the oddly-placed clock, the dashboard is generally well thought out. The switches for the heater, the warning lights and the rear fog lights are located on the left of the instrument cluster. A deep parcel shelf is found on the passenger side of the dashboard.

The Renault 14 is not a collector’s car and it is very difficult to find somebody today who is genuinely interested in it. There are small online-based clubs but nothing significant and very little parts support to speak of. Most Renault dealers look at you funny if you talk about a Renault 14 and junkyards crushed them by the truckload without keeping any parts.

Statistics provided by the Ministry of Transportation indicate that only 273 14s (regardless of trim level or year) were registered in France in 2011. That is a tiny and alarming number compared to the 993,193 that were built; granted not all of them were sold in France, and not all of the ones remaining are registered, but it is a sobering statistic nonetheless. The 14 is an endangered species.

14 prices range from a bottle of pastis for a rough example that has a bird nest on the intake manifold to about €2,000 ($2,500) for a rust-free late-model 14 TS with low miles and a five-speed gearbox.

Modern, affordable and practical, we wouldn’t hesitate to recommend the 14 as a classic daily driver. The biggest issue might be finding one as even clean examples sometimes get sent straight to the bin.

About our test car

The 1980 Renault 14 TL pictured above is a recent addition to the Ran When Parked fleet.  It was generously given to us by a good friend who has owned it since 1981 and recently quit driving it.

This is a car that has lived a hard life.  It has meandered through the desert in Morocco, it has battled deep snow in the French Alps, it has been a daily driver for most of its life and it hasn’t seen the inside of a garage in over twenty years.

“When I first bought this car everybody freaked out: ‘oh no, you just bought a pear!  This thing’s never gonna run.’  Well, it’s never let me down once.  It’s the car I’ve kept the longest and the best one I’ve ever owned,” explained the previous owner.

At the time of writing the odometer indicates 328,680 kilometers, a figure which equates to about 204,000 miles.  The previous owner drove the car for over five years with the odometer cable unplugged and he estimates that the true mileage lies in the vicinity of 450,000 kilometers (279,000 miles).

The car is on its third engine. The original one burned oil and was replaced by a used one about ten years ago. The replacement turned out to be very tired and it was replaced with the current engine.