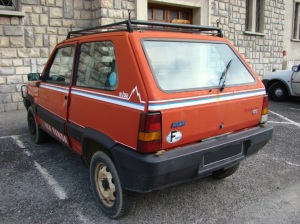 Fiat 500 prices have gone through the roof in recent years. The sudden interest in the tiny city car was partially prompted by the arrival of the new, retro-styled and front-engined 500.

Although the current-model 500 is the spiritual successor to the old 500, in practice the car’s real heir is the first generation of the Fiat Panda. Built from 1981 to 2003, the Panda was just about everything that 500 was: affordable, cheap and easy to maintain, relatively long-lasting and efficient.

Proof of this is that they are everywhere in Italy, much like the 500s were decades ago (or still are in Sicily). Folks hang on to them for ages, making them a true people’s car of the modern era.

Over the years Pandas have come in many different flavors. These include a capable four-wheel drive variant with numerous special editions, and an incredibly rare two-cylinder air-cooled base model.

As 500 values continue to climb to near Beetle-like figures and early Pandas are now over thirty years old, will folks eventually consider the Panda as a collector’s car?

3 thoughts on “Is the Fiat Panda (mk1) a future classic?”