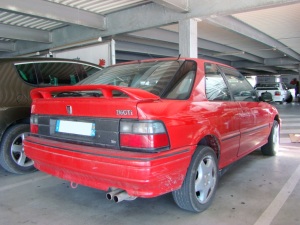 The Ikea parking lot on a Saturday afternoon is generally filled with family-mobiles such as Renault Scenics and late-model Passat wagons. However, at the far end of the lot we spotted a well-used Citroën BX 19 TZS and a three-door Rover 216 GTi.  BXs of all kinds are becoming endangered species, but the 216 GTis is almost extinct.

As its name implies, the 216 was powered by a 1.6-liter four-cylinder engine that was borrowed from Honda.  It was a sport variant of the Rover 200 series, and it was aimed directly at medium-sized hot hatches such as the Peugeot 309 GTi and the Renault 19 16s.

The 216 GTi was only built from 1990 to 1994, and very few of them remain today; in fact, the last one we remember seeing had been heartlessly dumped in a ditch several years ago.