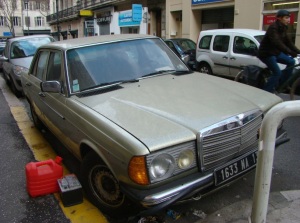 A few weeks ago, I got word that a 1981 Mercedes-Benz 230E was looking for a good home in Marseille.  As a long-time w123 owner and enthusiast, I like to think that I’m as good of a home as any, so I contacted the owner and we made a deal over the phone at 10pm on a Sunday.

There was an issue: the city’s law enforcement officials were tired of looking at the car and it was going to get impounded in the coming days.  The seller told me to come pick it up as quickly as possible, and I showed up there a little over twelve hours after our conversation ended.

Up until I turned onto the previous owner’s street, I hadn’t seen any pictures of the car and knew almost nothing about it.  A quick look around it revealed that it wore the typical battle scars of a car that has spent a significant amount of time in Marseille: there were dents everywhere, and a lot of the trim was missing.  Worse yet, the driver’s window and mirror had both been broken months ago when someone broke into the car.  Luckily, nothing was vandalized and the previous owner taped up the window so no water got into the interior.

After signing all of the paperwork, I put a couple of gallons of gas in the car, hooked up a battery I pulled out of my daily driver GSA and was on my way.  The car hadn’t been started in over a year, but it performed wonderfully on the 15-mile drive home. 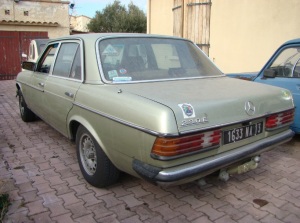 The car’s seats were wearing tired-looking covers.  I removed them but feared the worst as to what the upholstery would look like underneath.  Much to my surprise, everything was in fantastic shape, just dirty, so I removed the seats entirely and started cleaning them.  An hour’s worth of thorough vacuuming had everything looking almost like new: 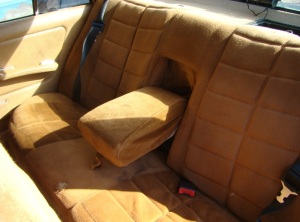 Next up was the alarm system, which refused to turn off.  Luckily this happened in my driveway, and not in downtown Marseille when I went to pick up the car.  The remote given to me by the previous owner didn’t work, and I didn’t have the required key to shut it off.  I had no interest in repairing or replacing the system, so I set off to remove it entirely, a task which was easier said than done. It appears that the alarm was an enigmatic mix of a Cobra and an Ariane, so I had to make my own wiring diagram.  It turns out that sensors in the door jamb and movement sensors on both a-pillars sent a signal to the main module in the engine bay, which in turn cut out the spark by not sending power to the coil.  I pulled the dash a little bit and wire by wire I carefully removed everything.  The car now starts without wailing. 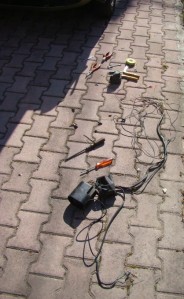 There was still one big problem with the car: 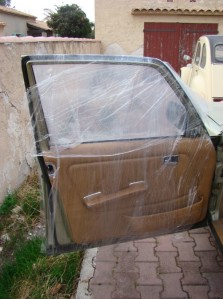 Finding a window proved to be a massive challenge.  In the United States you can almost always find a w123 at your local Pull-a-Part, but in southern France older Mercedes-Benzes are few and far between in junkyards.  I asked a man who owns a junkyard why that is, and he said that literally every single one he gets in ends up shipped to northern Africa.

I ended up finding someone with two 300D parts cars who was nice enough to sell me a window, though I was told to go remove it quickly.  “The cars are sold, a guy from Morocco is coming to pick them this week.”

I got around to installing the window last night (fairly simple – shoot us an email if you need instructions), which means the car is now ready for its first bath. 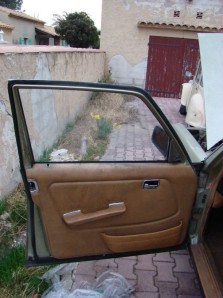 Once everything is cleaned up, the next step will be to flush all of the fluids, change the mirror, and find the missing trim.