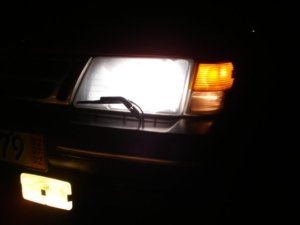 Looking back, my classmates in high school probably suspected there was something strange about me long before I started showing up every morning in an old Saab, though I doubt anyone found it all that surprising. I wore a lot of black, had a cynical attitude, took art classes, was terrible in gym, and liked listening to Dave Brubeck. By the time I got my first job working in a European car shop, even my German boss thought Saabs were odd, though it looked right parked amongst Mercedes-Benzes and Volvos. When I finally went to college, intending to be the world’s next great graphic designer, the fact that I drove red 900 seemed even more fitting. There was generally a copy of Print or some other design magazine laying on the back seat – probably not far from an old Pentax K-1000 loaded with black-and-white film. Of course I drove a Saab.

My interest in Saabs wasn’t just because they seemed to fit my lifestyle so appropriately when I was younger. Believe it or not, I actually had an interest in these bizarre Swedish things prior to teenage angst. Besides, many different kinds of people aside from “artsy” types enjoy Saabs: aerospace engineers, doctors, professors with tweed jackets, and people from New England. Even comedian (and Porsche collector) Jerry Seinfeld shows a fondness for the convertible models, but I digress…

I’ve always loved cars – particularly of foreign origin. One Sunday when I was around ten, my father and I stopped at the fashionably named local Saab dealership, Contemporary Motorcars. I can still vaguely recall peering inside of a 900 among the used cars and imagining how different the world must look from behind that aircraft-like curved windshield. My eye for aesthetics hadn’t really matured yet at that point, but in spite of the fact that I remember thinking the car was sort of ugly, I still found myself drawn to it. (Come think of it, much like my feelings towards a lot of the things I studied and came to really appreciate later as an art historian.)

I grew up reading about cars and pouring through decades worth of old Road & Tracks. Saabs fascinated me greatly in those formative years, though I’m still not entirely sure why. Strangely, I see myself among a group of apes curiously tilting their heads and cautiously approaching the shiny, black, prototypical “Ursaab” in a rocky clearing. Somewhere, buried in a cabinet of old papers, there are probably still some of my own childhood car drawings that bear an uncanny resemblance to vintage Saab models.

When I was about 15, while my interests in art and design were materializing, I was starting to seriously think about what I wanted for my first car. A Saab 900 seemed like a logical choice to me. I’d heard about their unique engineering, reliability, practicality, and safety. Even that weird styling of theirs became appealing. As luck would have it, a 1988 Saab 900 in a silvery-beige (known as “Rose Quartz”) appeared on the used car lot of a near-by Dodge dealership. It was a base model with a whopping 110 horsepower, had well over 100,000 miles on it. The interior was faded from burgundy to what can more-or-less be described as pink, and there were the quintessential canyon-like cracks in the dashboard. It did, however, have a manual transmission and was essentially free of rust. Some months later, after I had turned 16, the car was still on the lot. Apparently most people who go to a dealership intending to buy a product from Chrysler don’t suddenly change their minds and buy one from Saab-Scania. By the time the car finally left the Dodge dealer, it was mine. 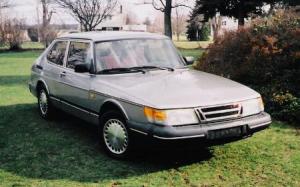 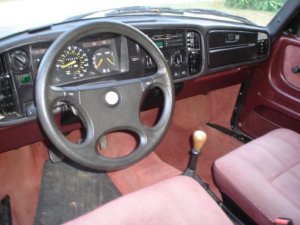 I took my driving test and got my license with my ’88 Saab on the day after Christmas. Living on the shore of Lake Erie, and being susceptible to ample quantities of snow for roughly six months out of the year, made me value the fact that the Swedes understood what this was about too. My 900 didn’t have any traction control, anti-lock brakes, or even snow tires. It simply handled well and inspired confidence, got great traction with front-wheel-drive, and had a fantastic heater.

For a couple years I racked-up the miles and essentially beat the Saab pretty hard. However, I was diligent about maintenance and it repaid me by always doing its job. It would crank over nearly instantly in the dead of winter in sub-zero temperatures, cruise along swiftly enough to get me my first speeding ticket, and even kept its act (and mine) together the time I plowed into a deer at speeds in excess of 70 mph. Lost a piece of trim on the rear bumper to that incident, but subsequently it was business as usual. 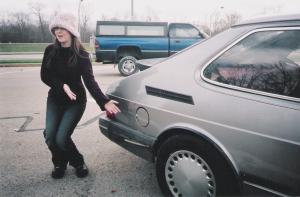 A friend pointing out the damage from deer impact

Even when it was starting to get a little tired, the Saab still did its best to keep up with me. When I finally decided to get a new car, I was already sold on another Saab. This time, it was a red 1993 900 Turbo. I even kept the ’88 around for a while because I couldn’t bear to part with it. 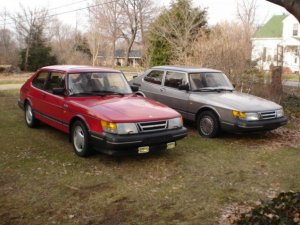 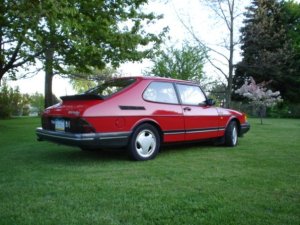 My 900 T, several years ago after a good wash

The Turbo was found at the same dealership as my previous Saab, interestingly enough. By this time, tales of Saab’s turbocharged cars were as legendary as Norse mythology for me. If I’m not mistaken, Thor was also the god of forced induction. There was always a bit of turbo lag, though it was part of the experience – a calm before the storm, in a way. When the Mitsubishi-built turbocharger began to whistle, a little torque-steer might follow, and then I could watch the boost gauge stand at attention while the laws of physics pushed my body against the (very comfortable) tan leather seats. 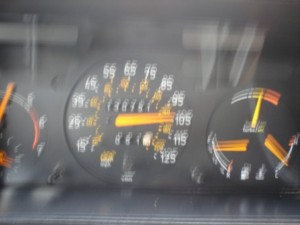 Turbo Power! (Don't try this at home - or on public roads)

Performance aside, I must say that both of my Saabs were the same fastback body style and therefore, extremely practical. I’ve carried nearly all my possessions in the back of my Saabs. Even the occasional 40lb propane cylinder, some 2x4s or plywood sheets here and there, and once, seven people at one time. With the rear seats folded down, there’s six feet of flat floor space. One can sleep back there and still be in a position to reach the rear window latches, the key, as well as the radio and heater controls with relative ease. The little things like that made me love Swedish engineering. Hell, I was thrilled when a girl I was dating turned out to be part Swedish, but that, of course, is another story. 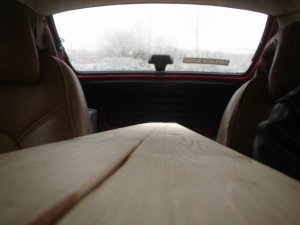 With the 900 T, I fully crossed the line from Saab driver to Saab fanatic. I spent a great deal of time with that car and put 112,000 miles on it in four years. There are few “daily-driver” cars that people just take out and drive for fun like a sports car. The Saab 900 was one you could though. I charged along back-roads and country lanes, drove it to school and work on a daily basis, used it to go camping, took it on long road-trips, taught some people to use a manual transmission in it, and upset a few State Troopers with it too. That car was everywhere I was. It was essentially my avatar. 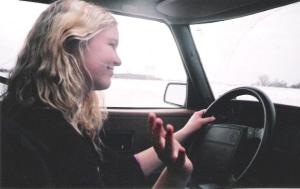 My Saabs provided me with many years and many thousands of miles of relatively trouble-free and enjoyable service. My 900 T was eventually retired when the alternator failed and a ball-joint popped apart (and with it, a drive shaft ripped from transmission) all in the same week. Rust was also starting to seriously take hold in the front fenders where, prior to my ownership, a bad accident repair left them prone to corrosion. By that time, I had already reluctantly sold my 1988 Saab, but to this day, I still have my ’93 Turbo in my back yard under a tarp. It’s a slow-going project. I still need to repaint the entire car and dig up a new radiator and headlights before it’s road worthy again. Perhaps it’s more effort than the car is really worth, but at least I can still say I’m a proud Saab owner…Saab-Scania, that is. 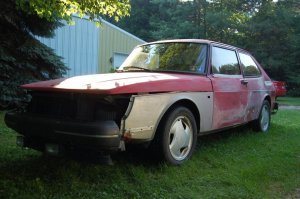 2 thoughts on “Sentimental For Saabs”