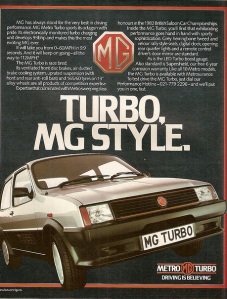 The Austin Metro is often credited as the car that saved British Leyland, but it’s important not to forget that it is also the car that revived MG. The brand’s Abingdon factory closed in 1980 when the last MGB was built.

British Leyland began developing the Metro in the late 1970s. It was intended as a car that would slot in just above the Mini and compete against more modern front-wheel drive hatchbacks such as the Ford Fiesta. Saving as much money as possible was a priority for the team in charge of the Metro, so several components were pulled out of the Mini’s parts bin.

Despite the reportedly hit-or-miss built quality and a lawsuit over the Metro name, the car was well-received at its launch. British Leyland executives saw an opportunity to capitalize on the car’s success and decided to revive the MG brand by giving it its own version of the Metro.

The Metro was not exactly MG material. The brand had built small sedans over the year, but its fan base was mostly interested in lightweight two-seater roadsters. MG couldn’t easily chop the Metro’s top off and remove the rear seats. However, it could at least tweak the engine to squeeze a little more power out of it.

The end result was the MG Metro, introduced in 1982. It used a 1,275cc four-cylinder engine similar to the one found in the Mini. The car was a stellar example of unabashed badge engineering, but at least it gave MG dealers something to sell. Still, most argued that the Metro was hardly worthy of wearing the iconic Morris Garage emblem.

To make the Metro sportier and more in line with MG values, a Garrett T3 turbocharger was bolted to the four-cylinder engine. British Leyland consulted Lotus engineers and with their input redesigned the cylinder head, the pistons, the crankshaft, and the valves, just to name a few. The compression ratio was dropped to 9.4:1.

The upgrades gave the Metro Turbo 93 horsepower and 85 lb-ft of torque. It accelerated from zero to 62 miles per hour in 10.2 seconds, and had a top speed of 111 miles per hour.. in fourth gear.

What engineers seemingly forgot to do was rework the gearbox. The Metro Turbo used a four-speed manual transmission, which had a hard time handling the extra power generated by the turbo. To remedy the situation, engineers fitted it with a two-stage electronic boost control, but it was less effective in application than on paper and broken gearboxes were not unheard of.

Gearbox aside, the Metro Turbo certainly packed everything an early 1980s hot hatch needed to have. It sat on specific 13″ alloy wheels, it had a body kit with front and rear spoilers, and had upgraded brakes. Interior modifications included sportier seats, red carpet and a more complete instrumentation. The Turbo weighed 1,807 pounds, almost a hundred more than the normally-aspirated MG Metro.

The Metro Turbo’s first redesign came in 1984 and included a new dashboard. A second and more thorough revamping was carried out in 1986. Production lasted until 1990, when the car was redesigned and renamed the Rover Metro. 67,110 MG Metro and Metro Turbos had been produced.