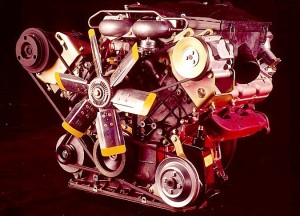 The PRV engine is indeed controversial. Many Volvo enthusiasts will insist it was terrible and reference the bullet-proof “red-block” four-cylinders, while many French car fans will claim it wasn’t so bad, and after all, a PRV powered Peugeot reached 253 mph at LeMans. DeLorean owners have often lamented that the engine claimed the life of their DMC-12 in a devastating self-destructive blaze, while those who owned PRV powered Dodge Monacos or Eagle Premiers probably didn’t care enough about their cars one way or another.

In spite of its many applications and long production run, the PRV engine was in many ways, a compromise. Originally, the Peugeot-Renault-Volvo alliance was to design a V8 for their more high-end cars. However, the great “Gas Wars” of the 1970s led to the first compromise – adoption of a V6 design instead. As a result of already having started work on a V8 design by that time, the 90º architecture of carried over to the V6 – a second compromise. Furthermore, another compromise was chosen to solve the uneven timing generated by arranging the 6 cylinders at 90º as opposed to the more logical 60º format of most V6s. This was the initial choice to use uneven ignition timing, or, “odd firing” rather than more complex split crankshaft journals.

Technologically these “compromises” led to a rather interestingly designed engine. Though the execution of the Franco-Swedish engineering that went into the lump wasn’t always of the highest standards, we can only assume that they meant well. So, let us examine what lies beneath the hoods of so many European (and some American) vehicles produced between 1974 and 1998.

To start off, the somewhat confusing geometric issues surrounding the PRV’s design should be explained. With any engine having an odd number of cylinders across a geometric plane, an inherent balance problem arises. (For the sake of discussion, let us assume that we’re only talking about 4-cycle engines here.) For a single piston to complete one full cycle (intake, compression, power, and exhaust) the crankshaft which it connects to must rotate two full times making a total of 720º. Since the power stroke obviously puts the most torque or “power” on the crank and the other strokes actually use power, there is a significant imbalance generated in the rotation. With the addition of a second cylinder to the process, the imbalance is counteracted by another cycle during which the power strokes are opposite of each other.
For example, a two cylinder, such as say a horizontally-opposed BMW motorcycle engine has one power stroke for every rotation of the crankshaft and the cylinders are arranged across a single (horizontal) plane and therefore one cylinder helps balance the other, though there is still a “dead” spot where neither cylinder is under a power stroke. A horizontally-opposed four cylinder such as a VW Type 1, could be argued as the ideal format for a 4-cylinder since every cylinder is on the same plane as well as balanced with one at an opposite point in the cycle. So, for two cylinders, and subsequently, groups of 4, the geometry is based quite nicely on 90º  angles:

The 90º V8, is therefore inherently smooth because every time a cylinder fires, the “pulsing” tendencies of a reciprocating engine are reduced. Not only is there a balance from side-to-side between the cylinder banks, but also from front-to-back due to a grouping of four cylinders along each geometric plane. (there are cross-plane crank and flat-plane crank V8 engines, but that, of course, is another story)  In the case of our PRV engine, we can see why the 90º angle was chosen when it was originally planned as a V8.
With any V6, the aforementioned balance issue arises due to there being three cylinders across each plane, but in the case of a 90º V6, a problem with timing arises as well. There are groupings of two cylinders separated by 90° of rotation, and groups separated by 150° of rotation, thus causing a firing imbalance. In a V6 engine, the ideal angle is 120º since the rotation of the crankshaft must be divided into thirds in order for two cylinders to share a crank journal. At this angle, the ignition timing is “symetrical” and the cylinders fire at 120º increments of crank rotation. Since such a wide angle is generally not practical for many applications, it’s most common to find 60º V6s which, for the same reasons of timing and balance, is nearly as preferable.

Comparison of 60º vs. 90º V6 block and split-journal crank geometry

To adopt the six cylinder format to an existing 90º block design, the journals of the crank could be splayed or split by 30º, which can be difficult to engineer since it can weaken the crank and also requires rather complex and more expensive machining. Alternatively to split journals, an “odd” firing order can be adopted to ensure each cylinder fires at its optimal point, regardless of the position of its ‘mate’ cylinder. This is not necessarily the optimal solution in terms of smoothness, however it is cheaper. It would not be until a full decade after PRV production started that the second generation of the design appeared with split journals in 1984.

At the time of its introduction, the PRV could be built with three different ignition systems. The most basic of which was a breaker-type ignition using a single distributor with two rotors and two coils for each cylinder bank due to the odd-firing pattern. Timing of the two cylinder banks had to be performed separately. Alternatively, a breakerless distributor system was developed, and finally a fully electronic system did away with the distributor completely.

Fuel delivery wasn’t any more simple on the PRV. Engines, such as those used on some Peugeots, used two different Solex carburetors attached to a single manifold. One carb was a single-barrel which supplied fuel under light loads and idle. A second dual-barrel then supplied the bulk of the mixture, having each barrel serve mostly one bank with a cross-flow channel between them. The single barrel acted as sort-of the “control” carb, and the double barrel was actuated via diaphragm. Many owners have opted to convert to Webers, or other less troublesome carbs.
Alternatively, and arguably better, Bosch K-Jetronic fuel injection was more common, though some applications were equipped with Renix (Renault-Bendix) fuel injection. In any configuration, the PRV could never really be considered a model of fuel efficiency, and was often noted for its lust for fuel.

The PRV came in a variety of displacements ranging from 2.4 to 3.0 litres. Peugeot and Renault in particular were the most active parties in the partnership in terms of modifying the design over the years. Renault turbocharged it, and Peugeot developed 24-valve variants. The 24-valve versions in particular were known for cam and tappet wear unfortunately. A bit of success came in the form of the WM Peugeot P88 sports racer. It developed over 900hp (up to 950 hp) with dual overhead cams and turbocharging – taking the car to the 253 mph course speed record at LeMans that year.

As one can see, the French were much more interested in the PRV. Volvo, despite of their investment in the project, pulled out of the partnership all together by 1990. The last PRV engine was built in 1998 after more than 970,000 were produced in the 24 year run. With ever increasing restrictions on economy and emissions, as well as the fast-paced development currently going on in the automotive industry, it is unlikely that such powerplant will ever be made again

Specifications of the early PRV from a period technical paper written by the PRV engineers:

3 thoughts on “What Lies Beneath: The controversial PRV engine (Part 3)”