This article is part one in a three-part series about the engine developed in collaboration by two French firms and a Swedish firm: the Peugeot-Renault-Volvo 90° V6.

Talks preceding the development of the PRV started in 1966 when Renault and Peugeot signed an accord to share mechanical knowledge, leading to the production of a series of four-cylinders. Volvo entered the talks in 1971. Initially, the engine was designed as a V8 which explains why the cylinders are at a 90° angle, an angle commonly found on V8 engines but less common on V6s. The developing parties chopped two cylinders off of it at the last minute in response to skyrocketing gas prices from the 1973 oil crisis. It was agreed that assembly would take place in the city of Douvrin in the Pas-de-Calais department of northern France. By 1974 the engine and the assembly line were both ready and the first car powered by the PRV made its appearance, the Volvo 264.

The PRV engine was controversial. For example, the first generation of the engine was an odd-fire engine and critics claimed it turned “lopsided”. They also pointed out its “unreasonable” thirst for gas, especially on models equipped with one or more carburetors. Nevertheless, this venerable powerplant has powered a large amount of cars in its 24-year production run; below is a look at some of the more recent ones.

The Citroen XM was the successor to the CX, which after 16 years of production was ready for a well-earned retirement.The XM differed from the CX in almost every aspect.Bertone penned a modern-for-the-time line for the flagship Citroen and it featured all sorts of luxury bells and whistles, including a 13th window designed to shield passengers from wind if the hatch was open.It was available with an electronically-controlled version of Citroen’s classic hydropneumatique suspension called Hydractive which could sense road conditions and adjust accordingly.

It used a 2975cc version of the PRV which was good for 170hp. A 24-valve variant of this engine was available a few years after its launch and the power increased to 197hp, though the automotive press criticized its fuel economy, even for a relatively high-performance engine. On the other end of the line the XM was available with an anemic 1998cc four-cylinder and several diesel engines, including an 82hp normally aspirated 2138cc unit that took a lamentable 17.6 seconds to reach 100km/h (62mph).

The package was an immediate hit: the XM was named Car of the Year in 1990, with the Mercedes r129 SL coming in a distant second. It sold well despite an exponentially increased price compared to its predecessor. The success came to a halt when problems started popping up.The XM’s biggest downfall was the plethora of electrical issues that immobilized the cars in the first years of production. This was in a time when car magazines still faced the task of explaining to skeptical readers exactly how a computer functioned in their cars and what it was doing there in the first place. Consequently, its owners didn’t fully understand how it worked and often times Citroen mechanics didn’t either which lead to shoddy repairs. This factor is amplified when the Hydractive suspension is taken into account: it, too, was prone to electrical failure. “Owning a 1991 XM was like the apocalypse”, reminisces one ex-owner, “you just didn’t know what to expect when you turned the key.” 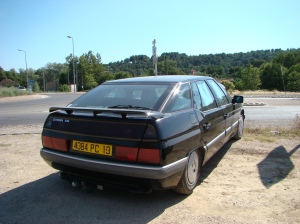 Introduced in 1984, the Thema marked Lancia’s return to the luxury sedan segment, a segment it had been absent from since the Flaminia’s demise in 1970.The Thema was designed by Italdesign and shared the Tipo 4 platform with the Fiat Croma, the Alfa Romeo 164 and the Saab 9000.The particularly well-finished Thema Station Wagon designed by Pininfarina was added to the Thema line in 1986.

The Thema is an oddball in the PRV’s history.How did a 2849cc Peugeot-Renault-Volvo engine find its way into a premium sedan from the Italian manufacturer that birthed the first production V6 engine?The answer lies in another one of the Thema’s engines, a Fiat-developed 2445cc turbo diesel.Story has it that Renault and Peugeot both used this engine in some of their cars and light vans and in exchange Fiat got to use the PRV for the Thema.

Aside from the diesel and the PRV Lancia equipped its flagship model with a complete palette of engines: it was available with several two-liter, four-cylinder engines that came in stock, 16 valves, or turbo flavors and the PRV was dropped in 1992 in favor of the Alfa 164’s excellent but oh so delicate 2959cc V6, a move made possible after Fiat acquired Alfa Romeo.

Odder still than the PRV-equipped Thema V6 is the Thema 8.32. Deciphering its name reveals that it uses a Ferrari 308-sourced 2927cc 32 valve V8. This rocket of an engine propelled the Thema from 0 to 100km/h in 7.2 seconds.

The 357,572nd and last Thema rolled off the Turin assembly line in 1994, ending a quiet ten year career.The Kappa took over the flagship position in Lancia’s lineup but the public pouted it and total sales were less than half of the Thema’s.

The first time a production car used a turbocharged PRV engine was in 1984 with the Renault 25 V6 Turbo. You may be thinking “but DeLorean made a small series of twin-turbocharged DMC-12s before the 25 Turbo came out!” That is true to an extent: these cars did exist but they were not factory-built cars, they were aftermarket kits by the manufacturer Island.

Staying in the turbocharged production car department the ultimate evolution of the PRV is the Safrane Biturbo which adds – you guessed it – two turbos to the powerplant, bumping the engine’s power output to 268hp. Introduced in 1993 and available from 1994 to 1996, a mere 806 examples were built of this super sedan designed to run alongside high-performance German sedans. Renault went far to attempt to create serious competition for Mercedes and BMW, to the point where the Safrane Biturbo wasn’t built in France like the base Safrane. Instead, Hartge of BMW fame supplied the engine (a tuned 2963cc PRV mated to a 5-speed manual) while Renault shipped Safrane bodies to Irmscher in Germany where the final product would be assembled.

Upon first glance only a few details give away what lurks under the hood: the Biturbo has model-specific 17” rims, a little spoiler, and a body kit for improved aerodynamics. The list of standard equipment is long and includes all-wheel-drive and a pneumatic suspension which enables the driver to choose from three different settings. The combination of these attributes gave the Biturbo a handling that no French car had been able to previously boast about.

The standard Safrane was launched in 1992 and despite an improvement in the materials used and how these materials were bolted together it was a car as mediocre as Renault can build. Its styling blended in with most cars and the PRV aside its engines were nothing that gave it an advantage over the competition – early base-model cars had a 2.0 eight-valve engine, for example. In 1996 the Safrane got a new, still-bland front fascia. Production ended in 2000 and it was replaced by the Vel Satis, a car that featured more bizarre angles than a college geometry exam and found less buyers in seven years than Ford sold ill-fated Edsels in 1958. 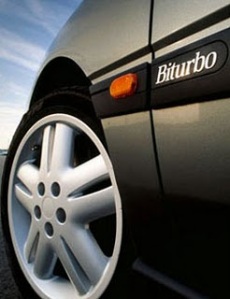 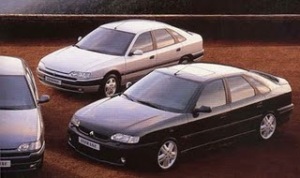 A following article will cover a few early PRV-powered car and another will cover the technical aspects of the PRV.

(Note: the Citroen XM was photographed by Ronan Glon for Ran When Parked. The rest of the photos were found online and we do not take credit for them.)

4 thoughts on “The controversial PRV engine – part one.”