The John Deere 750 is yet another case of badge engineering by the Americans. Thankfully, these boys from Iowa teemed up with the right people. When John Deere was in need of a more compact tractor model, they looked to famous diesel engine builder Yanmar of Japan who were already producing such machines. The resulting partnership would spawn several small diesel powered agricultural tractors ranging from two to four cylinders throughout the 1980s. This particular example is a 1984 John Deere 750 with a mere 700 hours on the clock. Primarily it’s use is mowing vast expanses of grass, but it has also proven itself to be very competent at pulling trees over, hauling massive loads of brush and logs, dirt plowing, and lifting heavy objects and towing dead cars.

The engine is a three cylinder Yanmar diesel with a displacement of 1.3 litres and 20 hp. It provides the tractor with ample torque and is remarkably fuel efficient and smooth. In nearly 25 years of service, it’s only mechanical malfunction has been a water pump failure. The redline is just under 3,000 RPM and the throttle is controlled either by a hand-lever or, for short bursts of acceleration, a foot pedal to the left of the brake pedals.

The engine drives a non-synchromesh transmission with high and low range operating on four forward gears and one reverse, effectively making 8 forward and 2 reverse ratios. In top gear, at roughly 2,500 RPM, the top speed of the 750 is around 15 mph. Models equipped with agricultural tires tend to be slower than this model, which is equipped with Bridgestone turf-tread tires. Gear changes can be tricky, especially at cold operating temperatures, but a direct linkage to the gearbox ensures an accurate gear selection. The clutch is mechanically operated, though not too terribly heavy for a vehicle of this sort. Brakes are encased within the differential at the rear, and are also mechanically operated. They are adequate, though some significant effort may be needed to slow the 750 from full speed. The engine block, transmission, and differential are all stressed members – just like a Formula One car!

Also operated from the engine are two power-take-offs or PTOs. The rear is directly linked to the transmission and can be engaged mechanically with a lever below the seat for powering machinery. The front PTO is engaged by an electric clutch via a switch on the instrument panel. This drive also operates the mid-mounted mowing deck that this particular example is equipped with.

Steering is fairly heavy at a stand still and non-assisted. This can make low-speed maneuvers a little difficult, but the precision and ease of the steering increases dramatically when the tractor is moving.

Driver comfort is fair, though after several hours, the low backed seat and stiff ride of the 750 can become uncomfortable. Under heavy operating loads, such as mowing for example, the mechanical noise can be quite loud as well. However, all of the controls are easy to use and fairly intuitive. Instrumentation is limited to a tachometer that incorporates an hour meter and three warning lights for charge, oil pressure, and temperature. For nighttime operation, there the driver can select lighting preferences from a rotary knob behind the steering wheel. They are flashing-ambers, flashing ambers with low beams, high beams, and a rear-mounted work-light that can be positioned as desired. 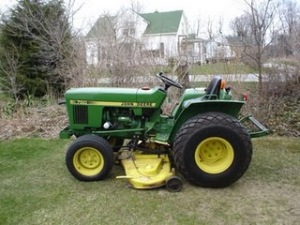 While John Deere may very well be one of the most American industrial icons, this re-badged offering from Japan really raised the bar for the tractor industry in its day and still remains a very practical choice. It has low operating costs, easy usability, and is exceptionally reliable.