In 1973, 48 year old John Z. DeLorean had “a better than even-odds change of one day being president” of General Motors. With a yearly income of $650,000, he was one of the highest paid executives in the world. But on April 1st, 1973, he threw all of that out of the Fourteenth Floor window and quit his post at GM. He had grown disenchanted with GM, a company that did little to encourage individual thought and that he no longer felt part of.

Soon after that he set about designing his own, so-called ethical sports car. DeLorean was a proven engineer and knew the ins and outs of the car industry. To take his car from the prototype stage to the production stage, he assembled a team that included well-known names such as Colin Chapman of Lotus and he hired Giorgetto Giugiario to design the car.

Next came the issue of where to build the car. After talking with several governments (including France), DeLorean settled on an area called Dunmurry in Northern Ireland, right outside of Belfast. The political situation in Northern Ireland at the time was unstable at best. Despite a ceasefire by the Provisional IRA and another one by the Official IRA (the former was broken in 1976, the latter stuck), the merciless confrontations between Catholics and Protestants were still happening on a regular basis. Unemployment was quite high and the government liked the idea of a car factory because they figured if people were at work, they wouldn’t be planting homemade bombs on boats and the like. While DeLorean fronted some of his own money and had private investors, a large chunk of the money came from the British government who saw it as a worthwhile venture.

With an insightful team and a brand new factory, production was ready to begin by 1981. This was promising and on paper it was a splendid car: it had original, sporty looks, it was safe and with its stainless steel body it was considered to be pretty modern in the late 1970s.

But the real car was deceiving. Under its stainless steel and rust proof skin was a rear mounted Peugeot-Renault-Volvo 2.8 V6 mated to either a 5-speed manual gearbox or a 3-speed automatic. DeLorean initially planned to have the car powered by a rotary Wankel engine but it was dropped in favor of the PRV because the Wankel was proving to be problematic to develop. As an added bonus, the all-aluminum, fuel-injected V6 was used in various Volvos, AMCs and even in the Dodge Monaco so it was already certified for use in the U.S. However, U.S. emissions requirements strangled the PRV until it churned out about 130hp, hardly a respectable amount for a car that was marketed as a sports car. As if being cursed by an underpowered and somewhat obscure engine wasn’t bad enough, the DMC-12 had a reputation for being roughly as fire proof as lighter fluid if it overheated. 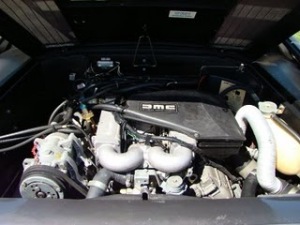 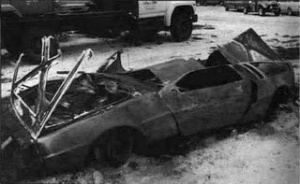 The car was originally meant to be sold for $12,000, hence the “12” in the name. However, by the time all was said and done, MSRP was around $25,000. By comparison, a 1981 Mercedes-Benz 300TD cost $23,900 and a 1981 Chevrolet Corvette cost $16,259. After its launch, customers were willing to pay a small fortune above MSRP to get their hands on one but despite that, sales were never quite what the factory had expected and they consequently didn’t the money they had planned on making.

The factory wasn’t spared from problems either- the workforce was largely inexperienced and working at DMC was sometimes a worker’s first job; the quality suffered accordingly. Early series cars were plagued with trim issues including poor panel alignment and loose doors. That meant more money had to come out of DeLorean’s pocket to correct these flaws after the cars left the factory.

It got to the point where DeLorean was quickly running out of funds. He repeatedly asked the British government for money but he was turned down. In late 1982 he was arrested on drug charges amongst others and the company shut down, a real shame considering the automotive genius that lurked in John DeLorean’s head. A private company continued to build a small number of DMC-12s in 1983 and production was halted after that. While DeLorean was later acquitted of all charges, DeLorean Motor Company was ruined and they did not build another car under John DeLorean’s supervision. A Texas company acquired the inventory of spare parts and will build you a new DeLorean to suit your fancy for roughly the price of a Porsche Cayman, sans options/accessories.