During the four years I lived in Bloomington, Indiana, I can only recall seeing six Alfa Romeos that I didn’t own:
– An overpriced pearl-white Spider Series 3.
– A white Giulia Spider rusting away in a field (I’ll have to dig up the pictures)
– A red ’50s 2000 Spider.
– Two Spider Series 3s that I chased down but never caught up to.
– A very nice red Giulia Spider.

Suffice to say, not many cars. So it was with great surprise that I discovered a beige 1988 Spider Veloce mere minutes after my most recent visit (and first in two years) to the lovely town of Bloomington.

There’s not much to say about this Spider. I know it’s an ’88 because it has the rare (and less-than-desirable) automatic seatbelts. I don’t know just when they became standard equipment, but I know it was for only part of the 1988 model year. I can’t even guess how Alfa Romeo got around the regulation for 1989! It is a fairly rare beige – whether the color suits your fancy or not is purely subjective. Obviously it’s seen some repaints in its life. 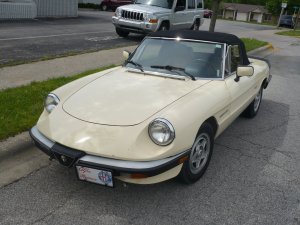